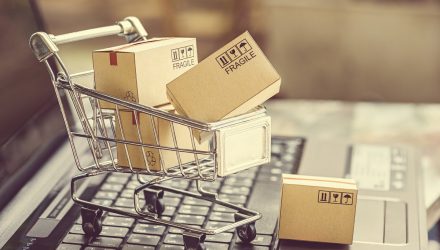 Amazon (AMZN) shoppers who utilize the same-day delivery service are likely to spend and shop more on the e-commerce site compared with shoppers who don’t get same-day delivery, according to a recent survey by investment firm RBC Capital. This is a key piece of data for the company, and is the reason why one analyst sees Amazon at $2300 a share in the future.

“So we have done these US online retail surveys for 7 years. When we came out with this last year we saw some sort of slipping satisfaction scores at Amazon. I think that’s because they were aggressively make-shifting toward third party vendors. And we saw what appeared to be a little bit of a plateauing of Prime interest in the US. This year both of those trends improved, and in the meantime what we’re seeing is, not surprisingly, the longer people are with Amazon, the longer they shop with them, the more frequently they shop with Amazon, and the more that they spend, satisfaction levels improved modestly, Prime penetration really nicely jumped from last year. So we think the flywheels continue to spin at Amazon. We like the stock. We’ve got new survey data behind it, and now what we are watching for as the next catalyst is the impact of this Prime one day shipping on Amazon retail sales, which won’t show up immediately, but we think over the next year there will a path to maybe some revenue growth acceleration because of that. So we like the stock,” explained RBC Capital’s Mark Mahaney on CNBC.

One possible issue consumers face is the quality control Amazon exerts over its delivered products.

Mahoney explains, “We saw 80% plus satisfaction levels among Amazon customers until last year when it kind of dropped down to 72%. We thought that was likely a cause of concern, and it seemed to have moved back up a little bit this year.”

Amazon reports that while it has better control and reliability when it ships products, third party vendors are often less conscientious, causing potential issues for the AMZN if they don’t regulate these dealers.

“There’s clearly been a shift, as the company has reported, in unit sales that are going to third party vendors, where Amazon doesn’t necessarily the packing and the shipping. So if it’s fulfilled by Amazon you can pretty much be guaranteed you’re gonna get that, two days, next day, same day. But when you have third party vendors involved that’s not the case. And so I think what Amazon has had to do is clamp down a bit and tighten up quality controls on those sellers, and if they’re not up to snuff, kick them off the network. But it is a risk for Amazon if they don’t handle those third party vendors correctly,” the RBC analyst said.

Learn about more industry trends on our Innovative ETFs Channel.