You are at:Home»Investing»In the Know: Looking At Recession Concerns 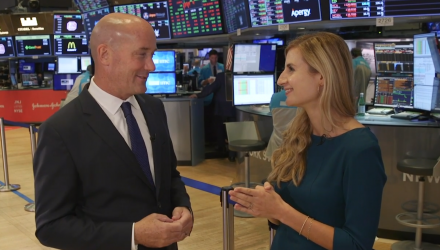 In the Know: Looking At Recession Concerns

In this latest episode of “In the Know” for Q4 2019, Sam Azzarello, Global Market Strategist with J.P. Morgan Asset Management chats with ETF Trends CEO Tom Lydon on the floor of NYSE to address the possibility of a recession.

Azzarello notes how investors are worried about a global slowdown, adding the macro picture does not look as good as it did 12 to 18 months ago, even while US growth is still strong.

As far as the biggest concerns, Azzarello points to the outlook concerning China. The nation matters for the global growth picture and things aren’t looking very good currently. A second concern is central banks.

“We look at what the ECB (European Central Bank) did,” Azzarello states. “The ECB started QE. We were just talking about QE coming to an end, and yet we’re in it again. So, do central banks have tools left? We would say no. Market expectations need to be tempered down.”

Additionally, Trump may be pressuring the Fed to keep cutting rates, but that may not be feasible. This means finding ways to look at strong dollar and fixing investors.

“The dollar has become very, very political. That being said, and we were talking about this earlier, the US is still the strongest house on the block,” explains Azzarello, clarifying why the US dollar continues to be strong.

Watch the full interview between Tom Lydon and Sam Azzarello:

When asked by Lydon what investors should do with portfolios, Azzarello believes the critical thing advisors need to be concerned about is taking risk off the table. That doesn’t mean moving to cast or piling into short duration. They just need to be smarter about where to put risk.

Azzarello points out value and the relatively cheaper parts of the equity market in this regard. Additionally, he says adding duration to fixed income is a proper way to handle things.

As far as going out longer and going down the credit quality line, Azzarello believes it’s a good idea with respect to duration. It’s the only buffer for equity market volatility currently. Adding five to seven years would be beneficial.

Concerning credit quality, things are arguably still stationed downward, with better quality across the board. Even with J.P. Morgan’s high yield allocation, they want higher quality within high yield, as far as Azzarello is concerned.

Related: In the Know: Top Trends in Year-to-Date ETF Flows

Lydon then switches gears to value, noting it’s been a tough decade for this factor. He questions whether there are signs of a shift.

Azzarello states, “Ten years in the making growth has outperformed value. But you look at growth, and it’s been mainly sustained by tech, and yet we know tech is getting regulated. We know tech profits are under pressure. But that even being said, I think investors just want to take risk off the table, and they want more income. And that’s pushing them into value anyways. So, value outperforming growth, it’s early stages, but it could be a sustained trend.”

As far as what to look forward to in 2020, Azzarello believes election risk will play a huge role. It’s unclear how that will express itself in markets. However, what comes to mind is financials, energy, and tech. Tech, specifically, will not conform to either side of the aisle anyone is on, making it the most relevant for new regulations.