You are at:Home»Investing»In the Know: Top Trends in Year-to-Date ETF Flows 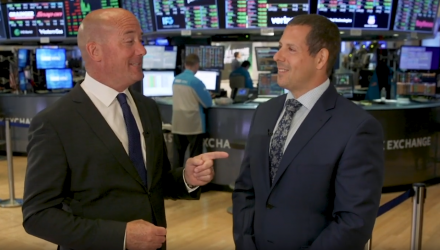 In the Know: Top Trends in Year-to-Date ETF Flows

It’s been another barnstorming year for ETF industry flows, says Doug Yones, Head of ETFs at the NYSE, in the latest update of “In the Know.”

Yones said year-to-date net cash flow in ETFs was around $135 billion (Editor’s Note: Now $157 billion as of Sept. 10, 2019). He said what was even more impressive was where the money was going.

In the segment, ETF Trends CEO Tom Lydon pointed out, just 10 years ago, there was merely a fraction in fixed income, as it was mostly equities. However, today, things have turned around.

As Yones described, it comes down to the narrative shift for ETFs. They may have once been picked as a side investment, but now people are starting to use ETFs across the entire portfolio. So now, as Yones continues, there are options to use ETFs around fixed income, equity, blended, and balanced portfolios.

“You can really tackle ETFs as part of your core building block, but you can also use them for satellite exposure,” says Yones.

ETFs Are There To Help In Adding Liquidity

When addressing liquidity and fixed income ETFs, Lydon states how some concern has come up in regards to too much money is in this marketplace. Yones, however, counters this by explaining how equities may always be trading, but bonds don’t always trade the same way. So, if there’s an investor providing liquidity into the ETF markets, pricing things every second, ETFs are there to help in adding liquidity. This makes the experience better for investors and advisors.

Speaking on concerns regarding the liquidity and fixed income, Yones states how published research reports should assuage any of these thoughts. The math spells out how ETFs aren’t a phenomenon. “They are a fund, and just like a mutual fund, you could buy a bond mutual fund, or you could buy a bond ETF. Effectively, the mechanics are the same thing.” The main difference comes down to efficiency and tax friendliness when working from an ETF standpoint.

As far as what’s new in the ETF world, Yones explains what innovations people can look forward to. One of the things being worked on is the idea of bringing ETFs to the floor with a designated market maker. This essentially means an actual person would be standing on the floor of the exchange, ready to trade. Ideally, that will come about in the next few months.

The last point Yones comments on are non-transparent active ETFs. He states how Presidium received approval from investment management at the SEC, and working with them will mean getting the products approved to list and trade. Ideally, that means there’s a chance to put those on the floor with a designated market maker as well.

“This could be a turning point for active managers to enter the ETF industry.”

To watch the entire set of “In the Know” segments, click here.