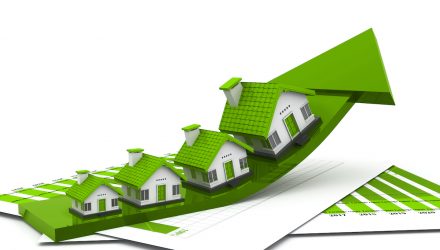 Markets seem to be bubbling with optimism these days, as the S&P 500 has now moved nearly 35% off its low in March, and the majority of states in the U.S. have begun to reopen their economies.

This has all been good news for the housing industry. The housing market and sector-related ETFs are roaring back to life in recent weeks as the industry becomes an unexpected source of strength in the economic recovery.

The Global X SuperDividend REIT ETF (SRET) is climbing today as well, up over 1%, and continuing gains made over the past week.

“The market has been making a V-pattern upward and there’s been a tremendous amount of skepticism around that but we are just starting now to see some evidence in the data turning,” said Michael Darda, MKM Partners Chief Market Strategist and Chief Economist. “Some better than expected housing numbers. As reopening gets underway, virtually all states now we are starting to see activity bounce off of very low levels.”

Analysts and economists are noting the return of would-be homebuyers as well, as fears of the coronavirus are replaced by enthusiasm for reopening the economy.

“The home purchase market continued its path to recovery as various states reopen, leading to more buyers resuming their home search,” said Joel Kan, an MBA economist. “Additionally, the purchase loan amount has increased steadily in recent weeks and is now at its highest level since mid-March.”

Zillow noted a “full rebound” in housing market activity on their platform from the lows seen in mid-April.

“Housing fundamentals are strong — much more so than they were leading into the Great Recession — and that bodes well for housing in general,” said Svenja Gudell, Zillow’s chief economist recently. “Despite the difficulties, we’re seeing several signs that there is still a good amount of demand for housing, and buyers, sellers, and agents are growing more comfortable moving transactions forward where possible.”

“For the first time in this crisis, we are being bombarded by good news,” Jim Paulsen, chief investment strategist at the Leuthold Group told CNBC.

However, analysts warn investors to exercise caution. Despite the stock market’s recent strength, the Dow is still down more than 12% in 2020, the S&P 500 has shed 7.4% for the year, while the Nasdaq has gained more than 4% as tech enthusiasm continues.