You are at:Home»Featured»Goldman Sachs CEO Lloyd Blankfein: Bitcoin ‘Not for Me’ 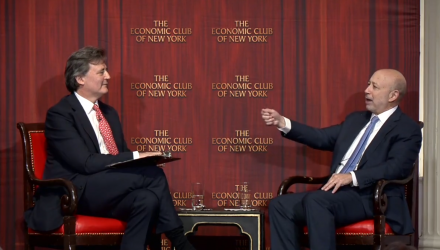 Goldman Sachs CEO Lloyd Blankfein: Bitcoin ‘Not for Me’

Lloyd Blankfein, CEO of Goldman Sachs, does not own any bitcoin, but he refuses to rule out its future. Appearing at The Economic Club of New York on Tuesday, Blankfein hit an optimistic note when talking about the cryptocurrency, specifically when he compared its potential with that of fiat currencies.

“If you can go through that fiat currency where they say this is worth what it’s worth because I, the government, says it is, why couldn’t you have a consensus currency?” he said.

“And so, it’s not for me. I don’t do it, I own no bitcoin… but if does work out, I could give you the historical path why that could have happened.” Blankfein ended his thoughts by stating, “I’m not in the school of saying, ‘Gee, because it’s uncomfortable, because it’s unfamiliar, this can’t happen.’ That’s too arrogant.”