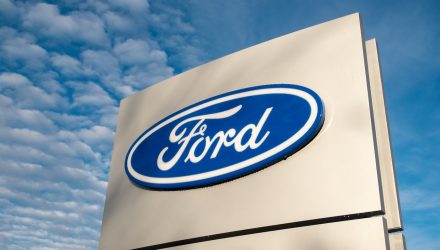 Ford stock is down slightly today, amid news that U.S. sales of the auto manufacturer’s new vehicles in August declined by 33.1% from the year prior. The company claims that the decline results from an ongoing global shortage of semiconductor chips that’s causing a plethora of issues for the automotive industry.

According to auto data firm Motor Intelligence, the Detroit automaker’s sales tumbled to an adjusted selling rate of 13.09 million vehicles, marking the slowest movement since June 2020 and a decline from this year’s height of 18.5 million in April.

The drop in sales was widespread, with sales of nearly every vehicle in Ford’s lineup falling last month compared with last year. While there were some marginal gains from the Bronco, Ford’s best-selling F-Series pickups dropped by 22.5%.

The projected sales that analysts expected for last month was roughly 13.1 million to 14.4 million vehicles, with J.D. Power and LMC Automotive predicting total sales to fall by 13.7% compared to August 2020.

This was not the first month decline for overall vehicle sales, which fell in May and June, as climbing prices and shortages drove prospective buyers away. The declines dragged car sales to below their pre-pandemic level.

According to the University of Michigan, consumers are feeling the pressure, as the percentage of households who said June was a good time to purchase a vehicle reached its lowest level in nearly 40 years. Oxford Economics also projects car sales to struggle for the remainder of 2021.

“While robust domestic demand and an improving health backdrop will keep a floor under vehicle sales through the rest of 2021, the pace of sales will be weighed down by inventory constraints,” Rasheed wrote.

August is historically one of the higher auto sales months of the year, but the chip shortage resulted in a plummet in inventory levels and a surge in the pricing of new vehicles.

Dealers only have roughly 942,000 vehicles in inventory for retail sale, compared with almost 3 million before the coronavirus pandemic two years ago.

“Although inventory is arriving at dealers daily, it is simply replacing the vehicles being sold, preventing dealers from increasing inventories to a level necessary to support a higher sales pace,” King said.

In the past year, used vehicle prices on average have gained 30%, according to Black Book, which tracks car and truck data. That’s generated scenarios where high-demand vehicles are selling for over what they sold for when they were new, said Alex Yurchenko, the company’s senior vice president of data science.

“The market is very strange right now,” said Yurchenko. “Dealers need the inventory, so they are paying lots of money for their vehicles on the wholesale market.”

Karl Jensvold, owner of PricedRite Auto Sales, a used vehicle dealer in Lincoln, Nebraska, said he’s seeing wholesale prices paring such rapid gains but sees these higher prices becoming more commonplace. “I think the normally used car market has reset to a different price point,” he said. “I don’t think we’ll see the prices (from) before COVID for a while.”

Ford isn’t the only company reporting losses, however. While most major U.S. automakers have adjusted to quarterly sales reporting, others still report monthly sales, such as Honda and Subaru, also recorded double-digit losses in August.

Aside from the decline in auto sales, Ford is also postponing its hybrid return-to-work program for employees who have not already returned to offices from October due to the spike in the delta variant of the coronavirus.

The Detroit automaker told its employees last week, less than half a year after initially announcing the flexible working program for its approximately 86,000 employees globally who hadn’t returned to work yet.

“The state of the COVID-19 virus remains very fluid, and therefore we are adjusting the start of our hybrid work arrangement to no earlier than January 2022,” Ford said in a statement.

About 120,000 to 130,000 of Ford’s 182,000 employees, primarily in manufacturing, have already come back to work. Schedules are not expected to vary much, if any, for workers who need to be at a certain facility to perform their duties.

Ford’s 56,000 hourly U.S. employees began rotating back to work in May 2020 after Detroit’s automakers had to close factories for several weeks at the beginning of the pandemic.

The automaker also said it is launching a new “short term remote” work arrangement that will permit employees who don’t have to be onsite to work from an alternate location within the country of employment for up to 30 days a year.

“The flexible hybrid model will be the primary work arrangement for employees whose work is not site-dependent,” the company said.

One upside for the company was that its retail sales climbed 6.5% compared to July, although they were still down by 33% from August 2020, according to Andrew Frick, vice president, Ford Sales U.S., and Canada.

Despite Ford’s recent decline in auto sales and other automakers, these ETFs have remained relatively steady on Thursday.

Meanwhile, there is a future of electric cars still waiting to be further explored. In the wake of Tesla’s dominance of the electric car industry, Ford and other automakers are now looking to learn from Tesla’s experience and build on it, something that could eventually boost auto ETFs.