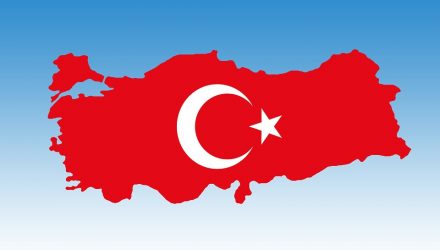 Turkey on a U.S. Debt-Dumping Spree

Turkey has been on a debt-dumping spree, selling off 12% of its United States government debt holdings between May and June. The move mirrors that of Russia dumping its stock of U.S. debt from $96.1 billion in March to an 11-year low of $14.9 billion in May.

The unloading by Russia caused speculation that China would be the most likely candidate to follow, particularly given the recent tit-for-tat tariff spat with the U.S. However, China, who has the largest amount of U.S. debt holdings at $1.18 trillion, cited that the U.S. is a “responsible international investor” and has no plans to unload.

U.S. President Donald Trump imposed sanctions on Turkey’s interior and justice ministers for their role in the internment of U.S. pastor Andrew Brunson and now, more sanctions may be on the way. The geopolitical tensions have wreaked havoc on the Turkish lira, which has lost 40% of its value against the dollar thus far this year.
Related: Indonesia ETFs Rev Up as Central Bank Props Up Rupiah

Turkey has taken advantage of the United States for many years. They are now holding our wonderful Christian Pastor, who I must now ask to represent our Country as a great patriot hostage. We will pay nothing for the release of an innocent man, but we are cutting back on Turkey!

Turkish President Recep Tayyip Erdogan is in the midst of an ongoing economic hurricane as the rising yields on Turkish bonds have rocketed past the 20% yield level. Despite the country facing pressure to hike interest rates, Erdogan’s words echo the Turkish central bank’s decision to remain steadfast in preserving a low-rate environment.

“There has been no sign that the central bank will be allowed to raise interest rates significantly and return rates to positive territory,” said William Jackson of Capital Economics. “Similarly, there has been no improvement in relations with the U.S. and additional sanctions may be on the horizon.”