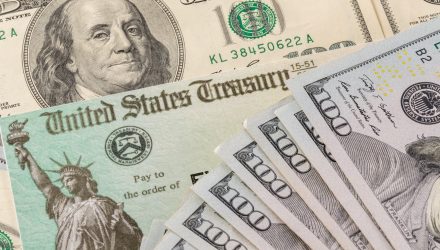 Looking to Buy Treasury ETFs on the Dip?

While inflationary pressures continue to irk investors, it seems unfathomable to many people that long-term Treasury yields could continue to fall.

A number of Treasury yields have done just that, including the 30-year note, which has gained over 23% since March, and could be poised for even more upside based on technical factors.

Typically, falling bond yields can signal expectations for a weakening economy. This idea has prompted some strategists to look deeper into the source of the decline, positing that momentum, positioning, and technical factors could be involved in the fall in yields, which run inversely to bond prices.

“It’s confounding,” Wells Fargo director of rates strategy Michael Schumacher said. “You’ve got some number of big players who for various reasons are pretty comfortable with the thought that economic growth is, I would not say weak, but not as spectacular as some people expected.”

One vigilantly monitored yield, which is particularly important to the mortgage and lending industries, is the 10-year Treasury note. The 10-year yield fell to 1.3% on Thursday, rising just slightly on Friday, with the rapid drop being attributed to factors such as short-covering, technicalities, cresting growth, and the Federal Reserve.

Many strategists projected that the 10-year would reach significantly higher levels, eventually targeting 2% or more by the end of 2021.

But instead, slightly “hawkish” developments with the Federal Reserve’s last meeting, arrived at the same time inflation has been climbing steeply. The June Consumer Price Index this past week indicated consumer inflation had risen by 5.4% year over year.

“What the market continues to hear is the Fed is getting cold feet on flexible average inflation targeting,” Bank of America U.S. rate strategist Meghan Swiber said. “What the market is pricing is effectively, if the Fed pre-empts a really full recovery in growth and inflation, that means they’re going to get a lower terminal rate.”

The markets may then be reevaluating how robust the economic recovery may actually be, in light of the Fed’s response to inflation.

While the Fed has continued to suggest it will allow inflationary pressures to run slightly hotter, with the latest measures of inflation the central bank has also changed how it will react to inflation. The market is unsure what exactly would trigger a Fed response, making investors more leery and bond markets stronger, as yields fall in response.

NatWest Markets head of global strategy John Briggs said the growth scare and Fed constriction of money supply to prevent inflation are two factors that could exist for some time.

“It’s getting more attention because China’s [economic]numbers weren’t that good, and you’ve got the delta variant. The sustained nature of the move is what’s surprising. We’re back to 1.20s [10-year yield],” Briggs said.

The strategist explained that the lower bond yields could unravel as the Fed heads toward the Jackson Hole symposium in late August, where a number of analysts believe it will begin to signal it will take action to curtail bond purchases.

The Fed is presently purchasing $120 billion in Treasury and mortgage securities each month, and it has said it would gradually reduce that program before it begins to increase interest rates. This decline in bond purchases could mark an acknowledgement that the pandemic is a decreasing threat in the economy.

“There’s growth concerns. If the Fed tightens to cut off inflation, they’ll only be able to do it a few times. It’s not stagflation but whiffs of it. It’s all in the long end,” Briggs said. The long end of the Treasury curve includes the 10-year, 20-year, and 30-year notes. The 30-year yield was at 1.95% Friday.

“I’m a guy who tends to be bond bullish, but if I look at inflation let’s say it stabilized medium term at 2.2% or 2.3%, how do you own a 2% long bond. You might as well go buy stocks. You’re getting negative real returns all along the Treasury spectrum,” he said.

Meanwhile, Bank of America’s Swiber said she projects yields to increase later in the year and forecasts the 10-year note will head toward 2% again.

“I think it’s going to be hard to find something that’s going to be the catalyst to stop this this summer. Probably, the Fed refocusing on tapering, moving past tapering and really being able to focus on what the prerequisites are for a rate hike will help,” she said. If rates continue to grind lower, she said the Fed could keep moving lower because it would force more short covering and positioning. “You really need something to jump in front of it and stop it.”

“I don’t think this movement lower in yields is telling us anything important about the economy. If you look at equity and high yield, and you look at investment grade assets, this is technical in the Treasury market,” he said. “I think we’re in the eighth inning of it.”

For investors interested in using ETFs to purchase Treasuries, one option can be had with the Vanguard Short-Term Treasury ETF (VGSH). This ETF offers exposure to short-term government bonds, focusing on Treasury bonds that mature in one to three years.

This index includes fixed income securities issued by the U.S. Treasury (not including inflation-protected bonds), with maturities greater than 10 years. Under normal circumstances, at least 80% of the fund’s assets will be invested in bonds included in the index.