You are at:Home»Featured»ETFs Attempt A 3rd Green Day In A Row Amid Positive Data Claims 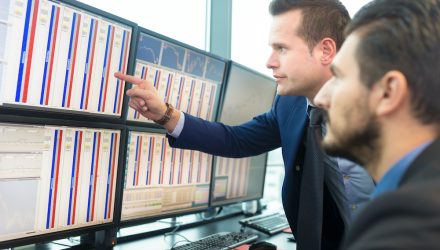 Stocks are headed for the third green day this week amid positive unemployment data that may be suggesting the economic damage from the coronavirus pandemic may be lessening.

The Labor Department released data Thursday that an additional 2.1 million Americans filed for unemployment benefits last week. That’s higher than a Dow Jones projection of 2.05 million. The good news is that the rate of fresh filings has fallen from prior weeks. Continuing claims declined by roughly 4 million in their first drop since the coronavirus outbreak.

Stocks continued their upward trajectory this week, after closing on the highs in a dramatic rebound yesterday. The Dow Jones Industrial Average traded over 180 points higher, or 0.72%, and looks to be headed for its third straight day of gains. The S&P 500 rallied almost 1% as of 1 pm EST, while the Nasdaq Composite also added 1%, recovering from a slump yesterday, and targeting all-time highs once again.

Stock Index ETFs are green today as well, tracking moves in the benchmark stock indexes. The SPDR S&P 500 ETF Trust (SPY), is up by 0.73%, the SPDR Dow Jones Industrial Average ETF (DIA) is 0.67% higher, while the Invesco QQQ Trust (QQQ), is the leader so far Thursday, climbing 1.07%

Traders say this week’s rally can be primarily attributed to optimism surrounding the reopening of the U.S. economy.

“The greatest stimulus for the economy is a safe reopening,” wrote Gregory Faranello, head of U.S. rates trading at AmeriVet Securities. “In the end, reopening in and of itself will gradually show improvement, although the true demand side remains unclear.”

Despite the positive economic data and reopening optimism, there are still some analysts and experts who are still wary of this dramatic run-up in stocks, which has mainly continued unabated since the March lows.

“I’m afraid to go all-in on this reopen trade since it’s already had a pretty big run, but there’s still some catch-ups,” Jim Cramer said on “Squawk on the Street.”

Cramer feels that the shift into technology and travel stocks amid the excitement over the economy reopening may have already transpired, and investors looking to jump in this late may be in for a rude awakening.

“The opening trade is sapping the money out of tech. I don’t know how much longer it can last … I look at this market, and I think how long, with the Dow up 4%, can we actually say ‘hey, the reopening trade is just starting,’” Cramer said.