You are at:Home»ETF Strategist Channel»The US is Following Rest of World into Slower Growth Mode 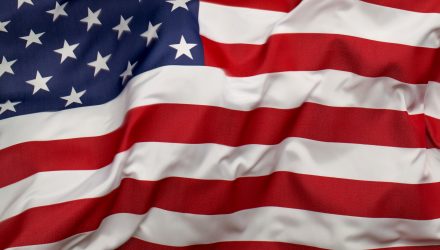 The US is Following Rest of World into Slower Growth Mode

The 35-day US government shutdown that ended on January 25th skewed much of the economic data that came out in February. That being said, the consensus seems to be that the US is following the rest of the world into a slower growth mode.

Fourth quarter GDP was released on February 28th and it showed the US economy growing at a 2.6% annualized rate, beating expectations for 2.2% growth, but down from the prior reading of 3.4%. Growth in Personal Consumption fell from 3.5% to 2.8% while the GDP Price Index edged up 1.8%. Retail Sales for December registered a surprise -1.2% MoM drop against expectations for a +0.1% gain MoM, while ex-Autos Retail Sales dropped -1.8% MoM.

Analysts registered confusion over the drop in sales coming during the busy holiday shopping period; however, some are suggesting Q4’s equity market collapse sapped the consumers confidence and that spilled over into a pullback in spending. Coincident with this pullback in spending was a rise in the Household Saving Rate during December to 7.6%. We’ll look to March’s report to either confirm or doubt the signals from the February Retail Sales number.

The Markit US Manufacturing PMI for January came in at 54.9 and fell to 53.0 for February. The ISM Manufacturing PMI dropped from 56.6 in January to 54.2 for February. While both numbers are suggestive of a continued expansion in the US manufacturing sector, the pace of growth would appear to be slowing. The Markit US Services PMI for February came in at 56.2, signaling continued strength in the non-manufacturing sectors. Housing data for the notoriously fickle winter month of January showed a drop-off from December, with Existing Home Sales falling -1.2% MoM and Housing Starts collapsing by -11.2% MoM.

No doubt the Q4 stock sell-off, followed by the government shutdown created a lot of noise with the data for January and February. We’ll look to the coming months reports for a better picture as to the health of the US economy. For now, the Fed appears to be on hold and the bulls have taken back the equity market. We would expect improved data going forward.

U.S. equities continued their hot streak in February as the Federal Reserve tempered expectations for future interest rate hikes and President Trump postponed a planned tariff increase on Chinese goods. The benchmark S&P 500 Index rose +3.21% on the month only to be outperformed by the smaller S&P SmallCap 600 and MidCap 400 Indices, which returned +4.35% and +4.24%, respectively.

From a sector standpoint, all 11 GICS sectors finished the month in positive territory. Information Technology was the top performer rising +6.89% on the month, followed closely by Industrials which gained +6.40%. Both cyclical sectors likely benefitted from the postponement of Chinese tariffs and an overall risk on sentiment during the period. Both Industrials and Tech are handily beating the broader market year to date, up +18.55% and +14.34%, respectively. Defensive sectors were a mixed bag, with Utilities rising +4.16%, Consumer Staples adding +2.30%, and Real Estate gaining +1.11%. Health Care, one of last year’s top performers, has languished year to date, overshadowed by political risk heading into the 2020 election.

The sector gained +1.17% in February, and has trailed the broader market by more than five percentage points year to date. While defensive sectors have lagged since the start of the year, they remain the best performers over the past year, with Utilities and Real Estate up nearly 20% apiece, compared to the S&P 500’s less than 5% return. Leading factor contributors for the year include High Beta and Momentum, which have gained +13.39% and +17.47% respectively on the year.

International equities continued to rally in February, following their U.S. equity brethren higher during the period. The Federal Reserve’s pause and President Trump’s delay in implementing tariffs on Chinese goods contributed to an overall risk on tone for the month, pushing both Developed and Emerging Markets equities higher. Developed International equities, as measured by the MSCI EAFE Index, rose +2.58% during the period and are now up +9.36% for the year.

Emerging Markets gained a scant +0.22% during the month, but are still up +8.99% YTD. From a regional and country standpoint, geopolitics clearly played a role in returns, with sharp differentials from Europe to Asia. U.K. equities, as measured by the FTSE 100 Index, gained +2.30% on the month, and are up +6.02% on the year in GBP terms. With the impending March 29 Brexit deadline quickly approaching, it remains to be seen whether or not lawmakers will call another referendum or reach a deal with the EU in time for an “orderly” Brexit.

Furthermore, Japanese equities rose +3.02% on the month, and are up +6.93% on the year in JPY terms ahead of another planned sales tax increase set to take place this year. It remains to be seen whether PM Abe will enact a stimulus package to offset the impact of the hike. In the meantime, investors appear to be steering clear of both countries ahead of such uncertainty, as both markets have trailed the broader MSCI EAFE benchmark YTD. Eurozone equities remain the anomaly, gaining +3.96% on the month and +10.57% YTD in EUR terms despite economic data that continues to deteriorate.

Critical U.S. negotiations on EU auto tariffs remain, which could derail the rally. Chinese equities rallied sharply with the Shanghai Composite Index up +13.79% in CNY terms on the month. Index provider MSCI announced last night that it will be increasing the weight of China A shares in the MSCI EM Index from a factor of 5% to 20% over the next year, with the inclusion taking place in three phases. MSCI noted the progress that China has made in opening up the China A market, but cautioned on further inclusion until further operational improvements are made.

China A shares will make up about 3.3% of the MSCI EM Index , from 0.7% currently, when all is said and done, about on par with the weight of Mexico in the benchmark. MSCI also noted that companies listed on Shenzhen’s ChiNext exchange will become eligible for inclusion in May. ChiNext is a technology heavy exchange similar to NASDAQ.

February was a fairly quiet month for the Treasury yield curve. Rates moved marginally higher, ~4-8 basis points, in a roughly parallel shift. The “minor inversion,” putting the 12 month Treasury yield slightly higher than the 2, 3, and 5 year yields, became less pronounced, as the 12 month yield stood still as those around it rose.

The greater concern lies with a possible inversion of the 2 year yield vs. the 10 year yield (or even the 3 month yield vs. the 10 year yield). It has not occurred in this cycle to date, and we have moved slightly away from the possibility, with the 2Y10Y curve steepening back to almost 20 basis points vs ~10 bps at year end. The longer portion of the curve (10Y30) has not been this steep (~35 bps) since the end of 2017.

In Chairman Powell’s recent testimony before Congress, he reiterated his newly dovish message of a patient Fed, willing to hold off on further rate increases in the near term, noting “muted” inflation pressures and the possibility of slack remaining in the labor market. He also noted that the FOMC expects “somewhat slower” growth in 2019, and that the committee now favors ending the balance sheet runoff (or what the President refers to as the “50 B’s”) later this year.

The market is no longer expecting a rate increase in 2019. In not unrelated news, the risk-on trade in fixed income that began in January has continued to run, with High Yield and Bank Loans returning coupon plus price appreciation. The yield spread over Treasuries offered by High Yield bonds continued to contract significantly in February, while the tightening in Investment Grade spreads followed suit, but at a clearly slower rate.

Strong demand for municipal bonds maturing in less than five years has made it difficult to find attractive yields in this range, and may push some accounts to hold taxable credit in this area. Maturities beyond five years still offer significant value for those in high federal income tax brackets, and high tax states.

Alternative investments joined global equities and mostly rallied in February. Federal Reserve Chairman Jerome Powell noted that the Fed would be more patient with future increases and said that the Federal Open Market Committee (FOMC) sees inflationary pressures remaining muted. With Thursday’s announcement that the U.S. economy grew at a +2.6% annualized rate in Q4, a slowdown from Q2’s +4.2% and Q3’s +3.4% rate, it should be noted that the Fed sees growth slowing further over the next three years.

Specifically, economic growth is estimated to be +2.3% this year, followed by +2.0% in 2020 and +1.8% in 2021. If there’s a bright spot, increased spending in intellectual property grew at a +13.1% annualized rate in Q4, a positive for potential productivity gains. It should be noted that long term sustainable GDP growth is largely a function of two components: labor force growth and productivity gains. We’ve started to see signs of the labor force growing, but have lacked a sharp uptick in productivity. Ultimately these factors should impact inflation and interest rates, which contribute heavily to performance of alternative investments.

West Texas Intermediate (WTI) crude oil gained +6.4% during the month to close just over $57/barrel, a four month high. WTI’s gains helped buoy the Bloomberg Commodities Index, which rose +0.8% on the month. Commodities as a whole have come under pressure over the past year, with the index falling -7.7% on slowing global growth, muted inflation, and a strong U.S. Dollar. Speaking of the Dollar, the DXY Index rose +0.6% on the month and is up +6.1% over the past year.

The Dollar’s rise has pressured Gold, which lost -0.6% on the month to close at $1,313/oz, and is largely flat over the past year. Equity market volatility and rising geopolitical risks have given Gold a bid, helping offset the strength in the Dollar. Looking ahead, Gold remains a viable portfolio hedge, and a breakout above $1,350/oz would likely garner further investor interest. Hedge Funds posted mixed results in February with 6 of 10 strategies posting positive returns; however, all trailed the broader S&P 500 Index. The top performing strategy was Equity Hedge (L/S) which gained +1.31% , while the worst performing strategy was Equity Market Neutral, which lost -1.27% during the period. These strategies are similar, but varying degrees of net exposure likely led to diverging performance paths.