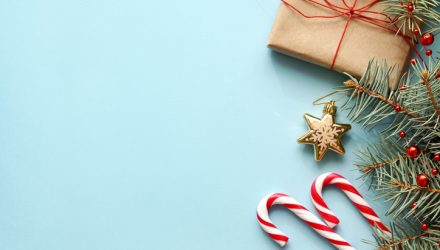 Lastly, looking at individual sectors, 8 of 11 sectors ended the month with positive returns, while interest rate sensitive sectors such as Utilities, Real Estate, and Consumer Staples posted monthly losses, down -2.08%, -1.21%, and -0.20%, respectively. Healthcare was the top performing sector, up +2.74% on the month, and +23.80% for the year, outperforming U.S. Healthcare (+16.64% YTD).

The Federal Reserve lowered its target rate on October 30th. The yield curve has moved a touch higher since then, including this morning’s levels. The move higher has steepened the yield curve, and there is no current inversion of either the 3 month/10 year curve, or the 2 year/10 year curve.

Credit spreads continue to trade at relatively tight levels, given the current global economic statistics, and where we are in the business cycle. This past month, spreads of Investment Grade and High Yield bonds contracted further, leading to strong returns. It is notable because higher yield levels in the month were a headwind for bond prices.

This headwind is clearly illustrated in the monthly return for the US Government Bond Index. With Government bonds offering lower yields (commensurate with their lower risk), and not benefitting from the spread tightening that occurred in the credit market, the index posted a return of negative 29 basis points. The US Aggregate Index is a blend of Government and Credit exposures, meaning some of its holdings were able to benefit from the spread tightening in the credit markets, and as such, its performance came in between that of the Government Index and the Investment Grade credit returns.

Significant amounts of money continue to flow into this space, supporting what may seem like pricey valuations.

With a Presidential election in the offing, and many potential candidates likely to increase current tax brackets, these valuations could prove to be somewhat reasonable.

The Global Aggregate Index faced the same headwind of rising rates, offset by low (or compounded by negative) government bond yields. This led to a return quite similar to what was experienced in the US Government bond market for the month.

The relatively long duration of the Green Bond Index worked against it in October, producing a loss in line with the other high credit quality indices.

Alternative investments were a mixed bag in November, largely driven by strength in the U.S. Dollar. The Dollar, as measured by the DXY Index, rose +0.95% to close at 98.27, which is just below its high for the year. The Dollar’s strength was notably felt in Gold spot prices, which lost -3.24%, or nearly $49/oz, to close at $1,464/oz. Gold prices have consolidated in recent months after a sharp run up over the summer. It should be noted, however, that Gold prices are still up +14.15% for the year.

The Dollar’s strength was also felt in the commodities space, with the Bloomberg Commodities Index losing -2.68% on the month, despite a gain in oil prices. West Texas Intermediate (WTI) crude oil gained +1.83%, or nearly $1/bbl, on the month to close at $55/bbl. Oil prices have remained range bound for the better part of the last six months. Expected OPEC production cuts could give crude prices a boost in the near term; however, the long-term trajectory of WTI prices remains a supply and demand equation. It should be noted that Saudi Aramco, the state-owned oil behemoth of Saudi Arabia is looking to sell shares to the public (1.5% of the company) at a valuation that could top $1.7 Trillion! Initial orders look strong from Saudi investors; however, global institutional investors appear to be steering clear.

Real Estate, as measured by the FTSE NAREIT All-REIT Index, lost -1.56% on the month as high interest rates impacted defensive income sectors. REITs remain up +22.86% for the year.

Looking at the Hedge Fund space, 8 of 10 strategies posted positive returns on the month, led by Event Driven strategies (+1.85%), while Equity Market Neutral (-0.20%) and Distressed Securities (-0.09%) were the two bottom performers. For the year, the top performing strategy is Equity Hedge (L/S), up +9.65%, while Equity Market Neutral (-0.93%) and Merger Arbitrage (-0.46%) remain stuck in negative territory.

From a currency standpoint, most majors were slightly weaker against the Dollar, while the Pound was flat.