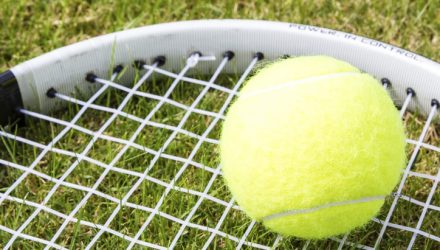 The Three Rules Volley Back and Forth

Summer is now in full swing with Wimbledon under way, and the S&P 500 is attempting to set its third record high within the last three months to align with tennis’ third grand slam of the year. Some of the marquee players who have combined to win multiple Wimbledon titles will face formidable challenges from young up and comers in addition to the physical and mental toll that comes along with the process. Global equity markets are in a similar predicament. Challenges are found in the form of trade tensions between the US and China, slowing earnings growth, and the central bank policy of the Federal Reserve.

Last weekend’s meeting between Presidents Trump and Xi at the G-20 meeting in Osaka, Japan should help to ease some of the pressure on the trade front, as the two countries agreed to restart negotiations after several months of acrimonious rhetoric. From an earnings and central bank policy perspective, we will have to be spectators for a while longer as Q2 reporting season does not get into full swing until mid-month and the Fed will not make its next rate decision until July 31st.  The early odds are favoring weaker Q2 earnings and a near-certain probability of a cut in the fed funds interest rate target.  Given this backdrop, RiverFront’s three tactical rules of Don’t Fight the Fed, Don’t Fight the Trend, and Beware of the Crowd at Extremes have changed since our last update. Below you will find a summary chart highlighting changes in the three rules since our April 29th, Weekly View:

DON’T FIGHT THE FED: We believe investors should not go against the policy guidance of central bankers in the US or abroad.

The current policy stance of the Fed is supportive of a continuation of the ten-year economic expansion and is bullish for risk assets as financial conditions have eased since the beginning of the year. According to the Chicago Fed’s National Financial Conditions Index, financial conditions are close to the loosest they have ever been; indicating a willingness for financial institutions to lend to borrowers. The Fed and global central banks have become dovish as inflation has failed to hit their 2% target despite relatively strong labor markets. Central bankers have once again started to use monetary measures to stimulate their economies. In the US, the Fed recognizes the strength of bank balance sheets and has allowed banks to reduce the levels of reserves on hand, freeing up excess capital that can be lent to businesses and consumers. This can be seen in the chart (right) of combined central bank balance sheets. We believe the Fed is currently supportive and on the investor’s side.

Internationally, the rate of change differs across the board regarding policy decisions. For instance, in Europe we view the ECB as supportive after Mario Draghi committed to restarting its Asset Purchase Program (APP) if necessary. The BOJ on the other hand committed to additional easing but was light on details so we continue to rate it as neutral/positive as we await further stimulus. In China, the PBoC is providing its own version of quantitative easing and we view the central bank guidance as supportive. 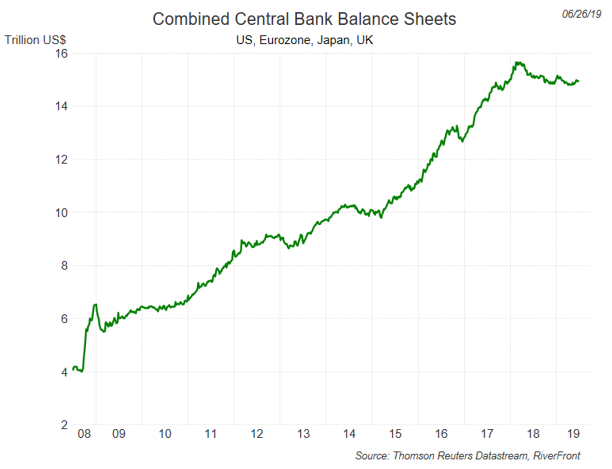 DON’T FIGHT THE TREND: We believe investors should determine the direction and strength of the trend and make investment decisions accordingly.

Currently the US primary trend, which we define as the S&P 500’s 200 day moving average remains flat. While the S&P 500 set new highs in April and June, each subsequent high has been harder to attain and less impressive than the previous. Consider for a moment, since the September 2018 high of 2940, the mark has been broken twice by an unimpressive 15 points.  It has now been nine months and after the volleying back and forth (volatility) the S&P has gone virtually nowhere; hence the flat trend.

BEWARE OF THE CROWD AT EXTREMES:

We believe investors should analyze sentiment to determine if it is sustainable at current levels. If sentiment is identified to be unsustainable, then as investors we should be willing to lean in the other direction and be prepared to act aggressively once the condition changes.

Ned Davis Research’s (NDR) Weekly Crowd Sentiment Poll is at the upper end of neutral after reaching extreme optimism in late April and then falling into extreme pessimism in late May. The drop in May to extreme pessimism came as trade negotiations fell apart with China. The subsequent rebound in sentiment from the May lows was driven by the Fed becoming more dovish and acknowledging its willingness to cut interest rates if needed. This change in investor sentiment has allowed the S&P to rally from the bottom of the 2700 to 2955 trading range. Sentiment, in our view, will be primarily driven by the Federal Reserve’s monetary policy decisions, the trajectory of global trade tensions, and global political climate. The circles in the chart below show how extremes in investor sentiment (pessimism and optimism) have coincided with market peaks and troughs. 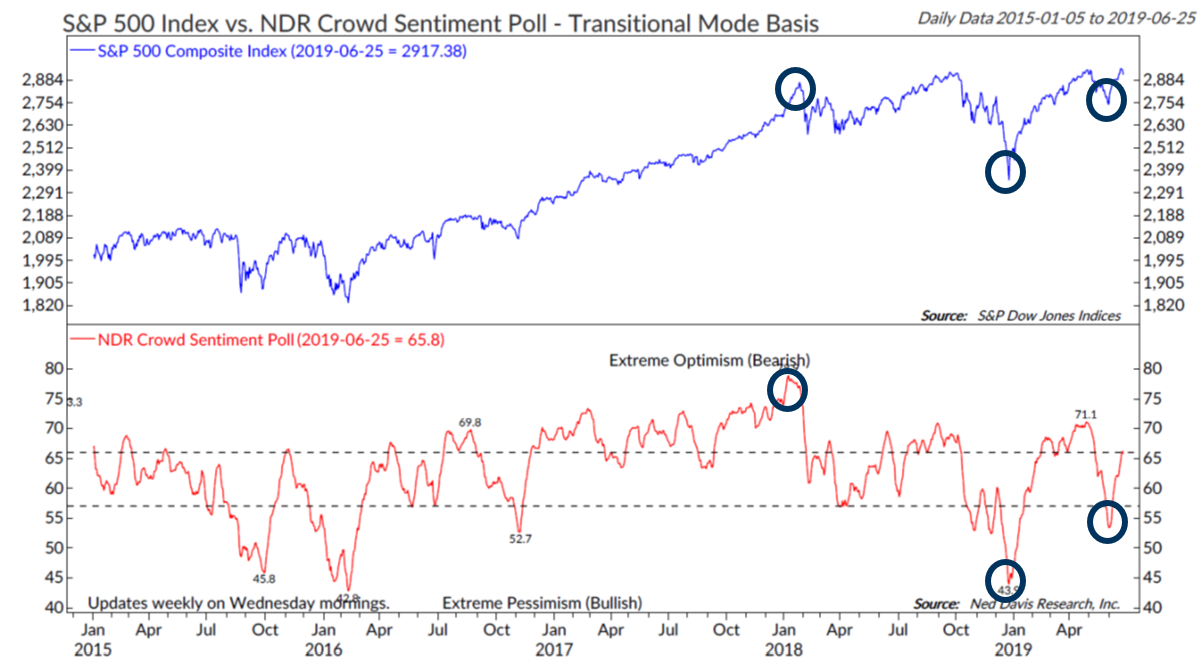 Past performance is no guarantee of future results. © 2019 Ned Davis Research Inc.  Further distribution prohibited without prior permission.  All Rights Reserved.  See NDR Disclaimer at www.ndr.com/copyright.html.  For data disclaimers refer to www.ndr.com/vendorinfo/.

The Fed signaling a probable rate cut and the recent de-escalation of US/China trade tensions has created a positive backdrop for equity performance.  With central banks on the investor’s side, a flat trend, and neutral sentiment, our three signals suggest optimism for stocks in the near term. If the conditions for the trend and the crowd improve from here, we will look to increase our exposure to equities across all portfolios.  However, if conditions deteriorate from here, we would maintain our risk neutral stance in the shorter time horizon portfolios and our slight equity overweight in the longer time horizon portfolios.