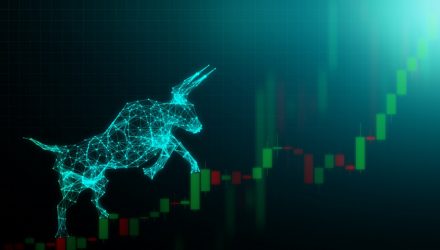 Seven weeks ago, we updated our three tactical rules: 1.) Don’t Fight the Fed, 2.) Don’t Fight the Trend, and 3.) Beware of the Crowd at Extremes.  A lot has transpired in that short period of time. First, the Federal Reserve officially announced a revised balance sheet normalization plan that would slow the runoff of Treasuries and mortgages starting in May and ending in September of this year. Second, the S&P 500 rose over 150 points from 2783 to its current level of 2939. Finally, additional progress was made in the trade negotiations between the US and China, China’s economic data improved, and earnings season in the US is off to a better than expected start; influencing investor sentiment. Below you will find a summary chart highlighting changes in the three rules since our March 11th, Weekly View:

Now that the Federal Reserve rate hiking campaign has been taken off the table and the Fed has stated its willingness to allow inflation levels to run above its 2% target for an extended period, we believe that the Fed continues to be supportive. The Fed’s pausing has helped facilitate lower mortgage rates and to reinvigorate a slowing housing market. The range for the fed funds rate is currently between 2.25 and 2.50%. Since our last update, the probability of the fed funds rate being unchanged through December 2019 has fallen to 36% due to the market pricing in a 64% chance of at least one rate cut before year-end; a scenario that did not exist in March (chart above).  Although we believe that traders are now overly optimistic about the prospects of a rate cut we recognize that the Fed is willing to respond quickly to softer data. Thus, for now we believe the Fed is on the investor’s side. 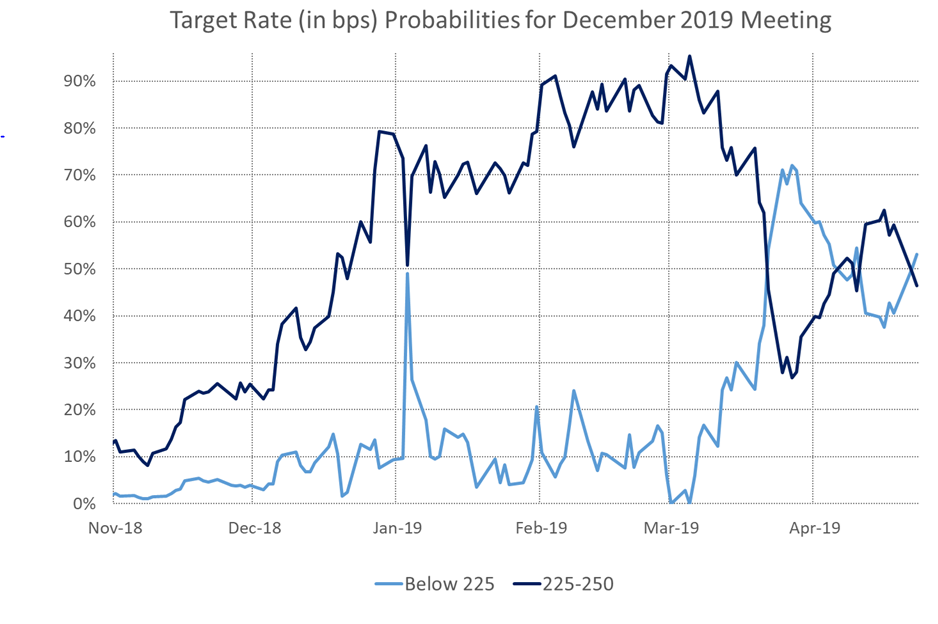 Source: Chicago Mercantile Exchange (CME) Group, RiverFront. Past performance is no guarantee of future results. Not indicative  of RiverFront Performance.

Internationally, while the backdrop of central bank policy is accommodative in Europe and Asia, we believe further stimulus is necessary given the tepid trajectory of growth, hence our neutral view.  In China, the Peoples’ Bank of China (PBoC) is providing its own version of quantitative easing and we view the central bank guidance as bullish. 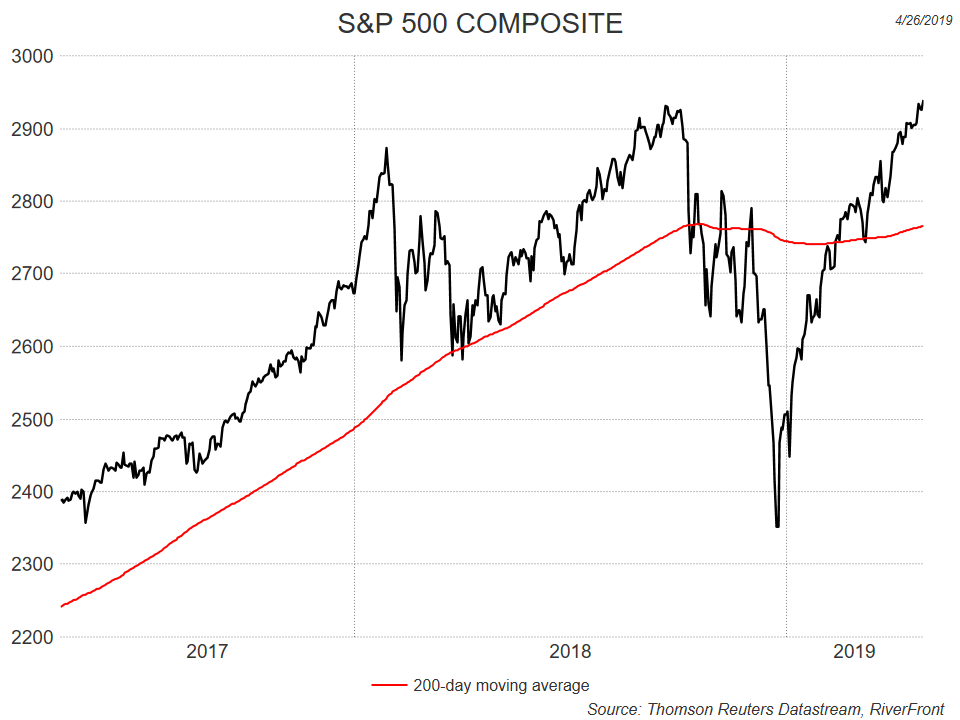 Past performance is no guarantee of future results. Shown for illustrative purposes and not indicative of RiverFront performance. See disclosures for index definitions.

However, now that the S&P is nearing its all-time trading high, the trend has steepened and turned positive. This is a significant change from seven weeks ago, reflecting accelerating momentum due to investors embracing the return of Chinese growth and better than expected first quarter earnings by US companies. We wrote on March 11th that the trend was at a crossroad. If it turned positive, the odds for a positive return over the next three months would improve above the long-term average when combined with current sentiment levels. However, a decidedly negative turn of the trend would warrant caution. The former scenario is playing out and therefore we rate the trend overall as ‘bullish’. 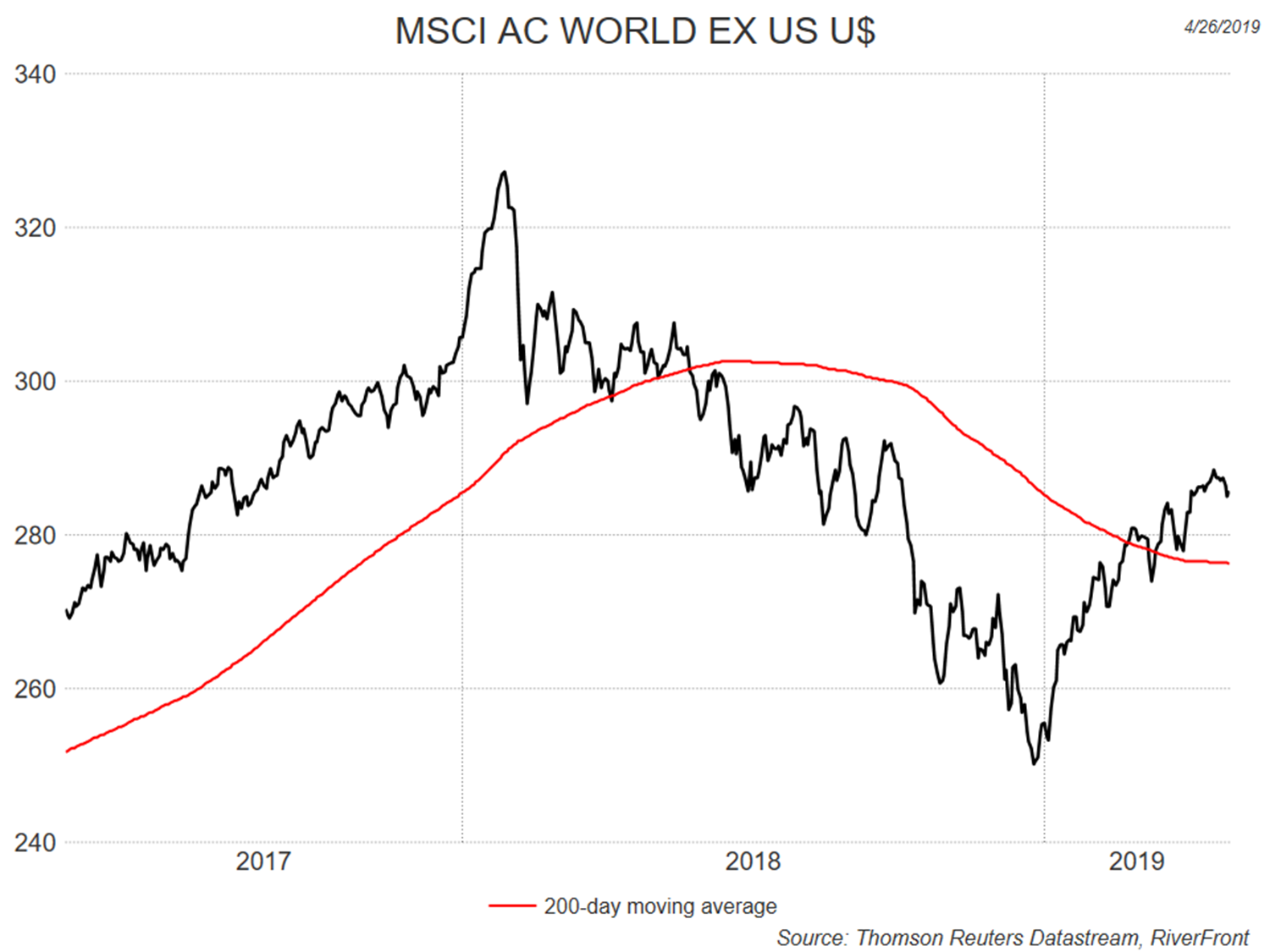 Past performance is no guarantee of future results. Shown for illustrative purposes and not indicative of RiverFront performance. See disclosures for index definitions.

Internationally, the positive economic growth in China combined with de-escalating trade tensions has turned the trend from negative to flat as shown by the smooth line in the chart (bottom right) of the MSCI All-Country World ex- US Index. We are encouraged by the index rising above its 200-day moving average.

BEWARE OF THE CROWD AT EXTREMES: Sentiment is a contrary indicator at extremes. Analyze sentiment by determining if it is sustainable at current levels. If sentiment is identified to be unsustainable, then as investors we should be willing to lean in the other direction and be prepared to act more aggressively once the condition changes. Current Condition: US: Extreme Optimism, International: Neutral.

Given the S&P 500’s strong start to 2019, investors’ fear of “missing out” could drive the crowd to reach higher extremes of optimism, as sidelined investors are enticed to chase returns. We use Crowd Sentiment Polls from Ned Davis Research (NDR) to help gauge whether the “Crowd” has reached optimistic or pessimistic extremes. As can be seen in the chart below, NDR’s sentiment poll has moved further into “extreme optimism” territory over the last seven weeks, suggesting that we should continue to be more cautious going forward.  Extreme optimism can resolve itself in one of two ways; either the market can decline making investors less optimistic, or simply consolidate (trend sideways) until the condition fades.

We have found judging the “Crowd” to be important, however we recognize that crowd sentiment signals often require additional interpretation.  For instance, when extreme optimism is combined with a positive trend, which is the current condition in the US, markets have historically tended to grind higher over time. Today, we believe that the US market will encounter some resistance at the S&P’s historical highs and will be range-bound until it can ‘work-off’ the high levels of investor optimism. 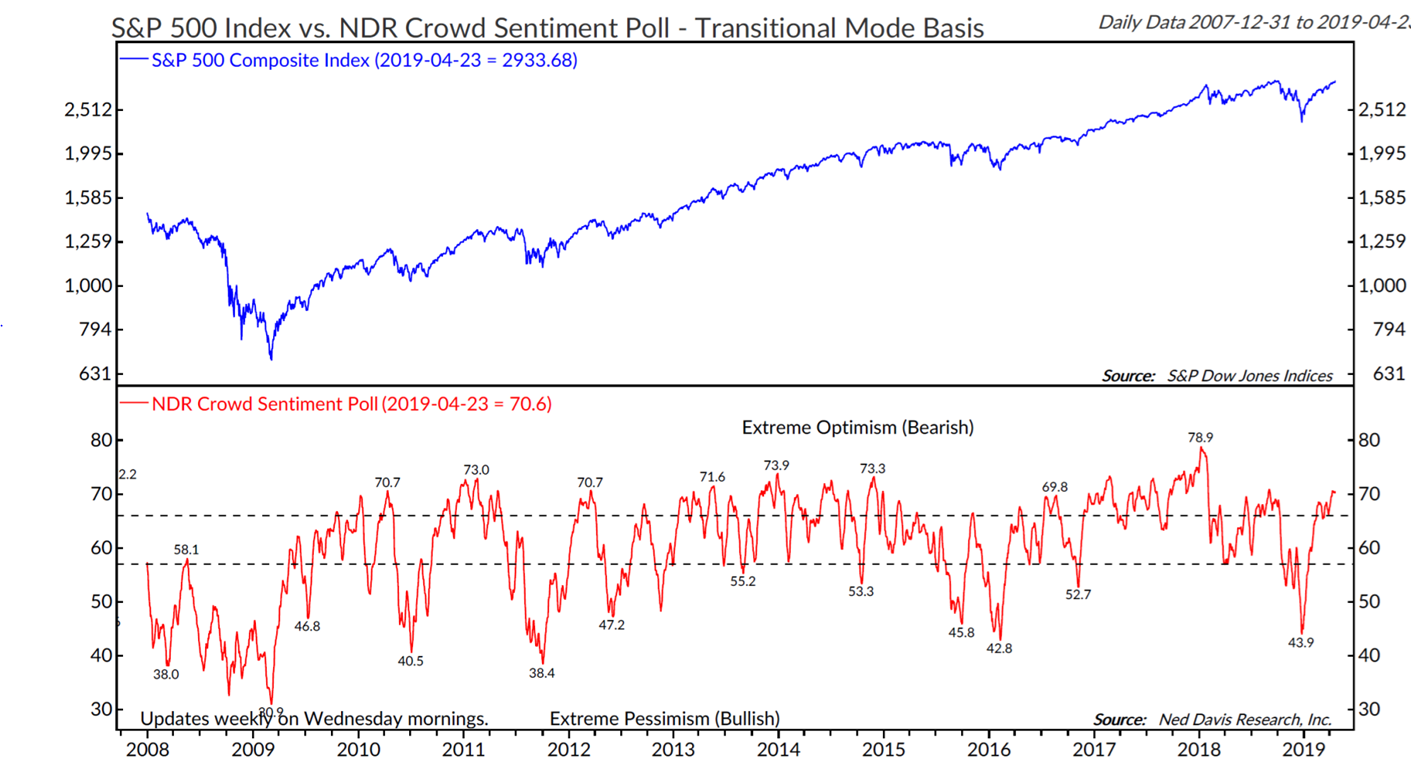 Past performance is no guarantee of future results. © 2019 Ned Davis Research Inc.  Further distribution prohibited without prior permission.  All Rights Reserved.  See NDR Disclaimer at www.ndr.com /copyright.html.   For data disclaimers refer to www.ndr.com/vendorinfo/.

We believe the Fed is on the investors’ side, the trend is positive, but the ‘crowd’ is too optimistic.  Net/net the conditions for our three tactical rules have improved from neutral to positive.   Therefore, we believe that it is appropriate to remain slightly overweight equities given our view of the low probability of a recession and reasonable valuation levels.

When referring to being “overweight” or “underweight” relative to a market or asset class, RiverFront is referring to our current portfolios’ weightings compared the composite benchmarks for each portfolio. Composite and benchmark definitions can be found on our website.