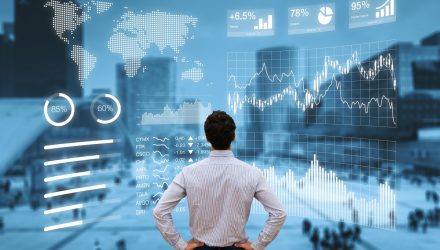 Ian Young October 2, 2019
Although the market recently made fresh highs in September, the remainder of the month was extremely volatile and stocks are within striking distance their August lows once again, as volatility has once again exploded. While many investors are understandably concerned about where markets are headed, what is the true state of the markets currently?
Matt Bartolini, Head of SPDR Americas Research at State Street Global Advisors, explains how taking a one year view and not just a YTD look changes the market perspective to essentially flat or even negative.
“I think year to date figures are a little clouded by the events of the fourth quarter of 2018. So I think everything broadly looks up. But when you extend the lens to take a one year view , you can sort of see that we’re still relatively flat on a year-over-year basis. In some instances, like with small caps and mid caps, pretty much anything outside the US, still down on a one-year basis. But definitely risk assets have rallied so far in 2019, and I think a lot of it has to do with the turn in interest rates. They’ve fallen basically 98 basis points this year alone. And this low rate environment has pushed a lot of investors further out on the risk curve. You can see that when looking at things like high-yield. High-yield exposures are basically up almost 13% year to date, and that’s largely come from spread depression. The spreads have significantly narrowed as well, basically by about 166 basis points year to date. So I think from the Markets perspective it’s looking at it as though we continue to have a risk on rally, but when you sort of dive a little bit deeper though, and go out one year further, and maybe look at some of the sector exposures, there’s still a little bit of hesitancy in terms of an all-clear sign, in terms of the longevity of the current rally,” Bartolini said.
Bartolini notes that the Fed may become less aggressive in rate cutting for October, but that there are still clear concerns for the economy.
“I think in October there’s probably a higher probability of a balance sheet expansion rather than a rate cut,” the State Street Global Advisors expert added.
“I think you’ll probably see the Fed rhetoric lean toward expanding their balance sheet in October, which could be viewed dovish, given the funding pressures out there but also based on the interest rates. But also there could be a little bit more of a wait and see approach to see if the rate cuts trickle down to the real economy and start to start to sort of spur growth and inflation and mitigate any of the manufacturing declines we have seen. But honestly it all comes down to what happens with trade. In the next few weeks we’re gonna get some more details of the trade negotiations, as tariffs have been further kick down the road. But then there’s also Brexit too. So the Fed is in a rock and a hard place come that October meeting,” Bartolini explained.
For more market trends, visit ETF Trends.
X