National Debt…Let the Market Tell Us When to Worry

Recent fiscal stimulus measures to combat the impact of COVID-19 have re-ignited investors’ concerns about too much government spending. While the federal debt has been on investors’ minds since the National Debt Clock was erected near Times Square in 1989, critics have been more vocal as our nation’s debt burden has surpassed our country’s annual Gross Domestic Product (GDP). To address this concern, we are writing about the same topic we discussed in February 2019.

Federal debt was over $23 trillion at the end of 2019 (top-line, chart below) and estimated to have grown to nearly $25 trillion YTD. 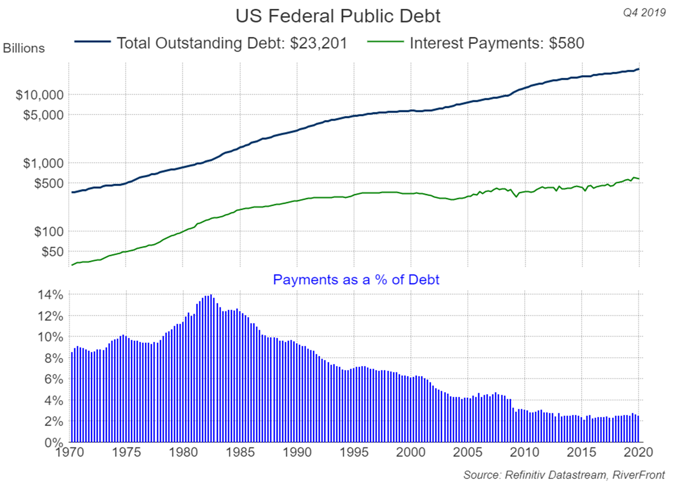 Disclosures: Past performance is no guarantee of future results. Shown for illustrative purposes. Not indicative of RiverFront portfolio performance.

However, due to low interest rates, the payment percentage (see chart above) has also declined making the larger debt-burden more manageable, in our view.

As scary as the increase in federal debt appears, we are less concerned for two reasons. First, in our opinion, there are several mitigating factors that make the debt-load less precarious than what is reported in the headlines. Second, we believe the ‘warning lights’ that would typically flash before a debt crisis remain unlit.

MITIGATING FACTORS TO THE ESTIMATED $25 TRILLION IN DEBT

The federal debt is a hotly debated topic and there are many additional concerns we have chosen not to address in this short publication. There are also a number of philosophical debates about intergovernmental debt and printing money that we don’t discuss in this piece, not because of the validity of these arguments but due to their timing. Ultimately, the only way we will truly know if our federal debt is a problem is if the market tells us it’s a problem; thus far these ‘warning lights’ are not flashing, in our view. When the following three warning lights begin to flash, we believe it will be time to worry about the federal debt:

When to Worry: Currency values move in cycles and the dollar is likely near the tail-end of a cyclical period of strength, in our opinion. Therefore, we would not be concerned about minor weaknesses in the dollar, in fact a little dollar weakness would be welcomed by US exporters and global investors. However, we would be concerned if the dollar began falling by more than 10% per year for several years.

When to Worry: We believe significant levels of annual inflation of 10% or more would cause the ‘warning light’ to flash.

When to Worry: The 30-year bond would need to rise significantly above current levels before we would start to get concerned.

IMPLICATIONS FOR THE ECONOMY AND MARKETS

The level and growth of the federal debt has irked investors for years. It has been a common refrain of market pessimists, and the passage of the $2.2 trillion stimulus bill and the additional stimulus programs that are being discussed may serve as another reason to keep investors sidelined. We believe this is a mistake. We don’t see a debt crisis on the horizon and for this reason remain comfortable with buying US equities and holding US debt.

However, we do expect large fiscal debt burdens to come with consequences. Since debt essentially involves ‘borrowing from the future,’ we anticipate that growing debt burdens perpetuate the ‘low and slow’ economic growth environment that has existed since the Financial Crisis. Over the last 12 years, we believe that ‘low and slow’ growth has widened the income divide among Americans, contributed to higher levels of equity volatility and caused many investors to remain under-invested in equities.

A basis point is a unit that is equal to 1/100th of 1%, and is used to denote the change in a financial instrument. The basis point is commonly used for calculating changes in interest rates, equity indexes and the yield of a fixed-income security. (bps = 1/100th of 1%)

To review other risks and more information about RiverFront, please visit the website at www.riverfrontig.com and the Form ADV, Part 2A. Copyright ©2020 RiverFront Investment Group. All Rights Reserved. ID 1188862