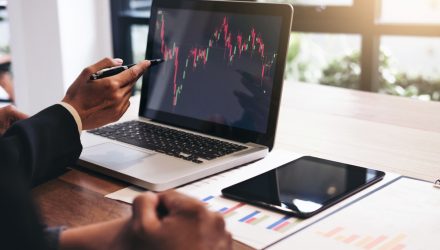 As we suggested in last month’s Market Wrap, the utility of analyzing and reviewing recent economic data has declined meaningfully with the onset of the COVID-19 pandemic. March and April numbers will bear the brunt of the financial fallout from a shuttered economy, and to try and extract meaning from the data is challenging at best.

We’ll try and highlight a few of the more salient data points published since our last update, and offer some observations based upon current conditions. Bottom line, economic data is frightfully bad.

On the employment front, we saw perhaps the most astounding figures in history. Early forecasts for April’s unemployment rate range from 15% to 20%, with nearly 30 million Americans seeking unemployment aid since the outbreak of the coronavirus. Weekly Initial Jobless Claims (see chart below) averaged 5.3 million during the month of April. At month’s end Continuing Claims totaled 18 million people.

Now, the good news is that the federal government has stepped up benefits to the unemployed through various measures designed to help labor weather the mandatory shutdown of their employers. As we go to press, more states are beginning to relax restrictions on business and we expect to see a steady decline in unemployment during the month of May and on into summer.

Expanded unemployment benefits may offer the perverse incentive of keeping people at home, rather than back in the labor force, as idle wages for some exceed employment income. First quarter GDP showed a decline in the US economy of -4.8%, versus a 2.1% growth rate in Q4 2019.

Personal Consumption collapsed by -7.6% as businesses shuttered and workers were sent home. April’s numbers are likely to be even worse than those for March as many states didn’t shut down commerce until mid-month.

Our friends at Strategas Research Partners are forecasting Q2 GDP to decline by a staggering -33% (annualized YoY), rebounding in Q3 +20%, finishing 2020 down -5.4% relative to 2019. While the numbers around the economic collapse are stunning, to say the least, so too has been the fiscal and monetary response from Congress and the Federal Reserve. Time will tell if it’s enough to offset the damage caused by the shutdown, but the sooner America opens for business, the better off we’re all likely to be.

With April’s gains negating last month’s losses, the S&P 500 stands down -9.30% YTD, and up +0.86% over the past year. From a style standpoint, Growth stocks again outperformed Value stocks, with the S&P 500 Citi Growth Index gaining +14.45% compared to the S&P 500 Citi Value Index gain of +10.71%. Environmental, Social, Governance (ESG) as a quality factor again outperformed the broader market, with the MSCI USA Extended ESG Focus Index gaining +13.11% during the period.

Taken as a whole, ESG has clearly proven its merit both from a values based investing standpoint, risk mitigation tool, and absolute performance driven strategy. From a sector standpoint, those sectors hardest hit bounced back the sharpest, with Energy rallying +29.78% despite crude oil futures briefly turning negative, and Materials gaining +15.31%. Economically sensitive sectors such as Industrials and Financials lagged the broader market, returning +8.73% and +9.58%, respectively. Utilities were the worst performing sector on the month, posting only a +3.22% gain as investors rotated into riskier assets.

The month’s notable standouts were from the market’s biggest companies. Facebook (+22.73%), Apple (+15.54%), Amazon (+26.89%), Microsoft (+13.63%), and Google (Alphabet, +15.90%) all posted strong gains leading into this week’s earnings. All are flat or positive YTD. Companies benefitting from increased virtual engagement, services, cloud computing, and e-commerce continue to buck the trend and provide a haven to investors looking towards future societal themes, which may be all the more accelerated due to the unfortunate impact of the coronavirus.

With parts of the U.S. economy starting to open back up, it will be interesting to see how consumer habits change and how people interact moving forward. Professional sports will take on a different form, as noted by NASCAR resuming racing May 17 at Darlington, but without fans. The world is changing, and companies involved with technologies such as AI, Robotics, Payments, and Digital Infrastructure stand to benefit the most.

Notably, Emerging Markets rebounded significantly more than Developed Markets, outperforming by more than +250bps; however, neither index recouped their March losses, with Developed and Emerging Markets recouping nearly 50% and 60% of their previous month’s losses, respectively. This compares to the S&P 500 which effectively recouped its March losses.

Part of the EM outperformance versus DM can be attributed to China reopening the vast majority of its economy, whereas DM countries such as Germany are just starting to open their countries up slowly. For the year, both DM and EM equities are firmly in the red, down -17.65% and -16.55%, respectively. Environmental, Social, Governance (ESG) as a quality factor underperformed the broader international markets in April, but remain outperformers on a year to date, 1- and 3-year basis.

From a country perspective, the U.K. (FTSE 100 Index), Hong Kong (Hang Seng Index), and China (Shanghai Composite Index) all underperformed their respective DM and EM benchmarks, while Japan (Nikkei 225 Index) was the lone outperformer by +14bps (all in local currencies). At the regional level, the Eurozone, as measured by the MSCI EMU Index returned +6.57% in EUR terms, but remains down more than -20% for the year, highlighting the difficult path that lies ahead for the bloc’s recovery.

Not only does the Eurozone lack coordinated fiscal efforts, the monetary efforts of the ECB are likely to fall short despite repeated proclamations inspiring a “do whatever it takes” mentality. This stands in sharp contrast with the U.S. Federal reserve, that a “do whatever it takes” mentality means something completely different – mainly Trillions of dollars more in stimulus and a more coordinated effort.

At the sector level, Materials and Technology outperformed, returning +13.43% and +10.75% respectively, while Utilities lagged. Energy returned +6.59%, a sharp contrast with the U.S. energy sector. Adding insult to injury, Royal Dutch Shell cut its dividend for the first time since WWII in 1945, signifying the hardship befallen the sector.

The U.S. Federal Reserve has continued its asset purchases at a brisk pace, significantly growing its balance sheet in an attempt to support the functioning of the fixed income markets. This has provided a sense of relief, and reduced the volatility experienced from mid-March through early April. During the past month, the Fed rolled out additional liquidity and lending facilities, and made it clear that they are not done.

Jerome Powell and the Fed seem to have adopted the European Central Bank’s mantra of being willing to do whatever it takes to fight off a crisis. This is increasingly a global theme within Central Banks. They all seem to be playing catch-up to the Bank of Japan’s playbook, being willing to buy not just government bonds, but also corporate bonds, perhaps some junk bonds, and even ETFs or equity in companies. Japan is already there, and other central banks are slowly adopting those policies. These interventions may be a short-term salve, but certainly not a long-term cure.

The top performer in 2020 remains Government Bonds due to their fight to quality appeal. They were a weak performer in the month of April due to little performance coming from duration or coupon. Emerging Market and High Yield exposures recovered some of their losses during April, but remain underperformers YTD. Investment Grade corporate bonds were hit hard during the market volatility, but have managed to claw their way back to a respectably positive performance YTD.

During April, the municipal sector did not participate in the broad bounce-back in pricing. There are funding concerns, given that sales tax revenue can play a large role in a municipality paying its bills. Real issues are likely to be limited to airline/transportation revenue bonds and the municipalities that went into the crisis in an extremely levered position, such as Illinois.

This funding concern has affected the space indiscriminately, making the muni bond market one of the places that offer significant value, if you do your due diligence and pick up a few of the babies that went out with the bathwater. Liquidity has declined significantly and must be taken in to account when making purchases. U.S. Senate Majority Leader Mitch McConnell’s comments on being in favor of broadening Chapter 9 Bankruptcy filing to allow for U.S. State bankruptcy was unhelpful, and most likely a negotiating tactic. Being unable to access Chapter 9 is one of the things that helps keep municipal borrowing rates low. Opening access, and having a state like IL take advantage of Chapter 9 would raise borrowing costs across the board.

Alternative investment performance varied wildly in April as crude oil plummeted and precious metals such as gold shined. The Federal Reserve announced further stimulus measures, the yield curve and U.S. Dollar (DXY Index) were largely unchanged on the month, and volatility, as measured by the CBOE VIX Index plummeted more than -36% to close at 34.2 after surging above 80 (all-time highs) at the height of investor panic.

Perhaps the most interesting development in the alternatives space during April was the fact May futures contracts on the NYMEX turned negative, hitting a low of -$37.63, catching the world by surprise. Oil prices plummeted, with U.S. West Texas Intermediate (WTI) crude oil losing -8.0% on the month to close at $19/barrel on the NYMEX. Oil prices have lost -69.1% year to date, falling from $61/barrel at the start of the year. Futures prices plummeted as time to expiration on futures contracts began converging towards spot prices.

Already weakening global demand was turbo charged by the covid-19 pandemic, and the uncertainty around when demand from cars, trucks, and planes may pick up, and to what extent. Has the future of electric vehicles and renewable energy finally been put into the lime light? Storage tanks and tanker ships are full, with global storage capacity nearly at capacity, meaning until a pick up in demand takes place or oil spigots are turned off, excess supply will need to go somewhere – and that may mean additional negatively priced contracts. The drop in oil prices caused a commensurate fall in commodities prices, with the Bloomberg Commodities Index losing -24.7% year to date.

The lone bright spot in the commodities space has been gold, which gained +6.9% in April to close at $1,687/ounce, up +11.2% from $1,517/ounce to start the year. Gold is likely to continue to get a bid as investors look for non-correlated assets, portfolio diversifiers and hedges, and ways to ward off the inevitable negative impact of $10 Trillion in global stimulus. Real Estate, as measured by the FTSE NAREIT All-REIT Index rose +8.8% after losing -21.4% in March.

Fears over the ability of individuals and businesses to make rent continue to keep the sector depressed. What’s more, with Federal grants focused on payroll it remains to be seen the impact the coronavirus will have on real estate of all kinds. Stay tuned.