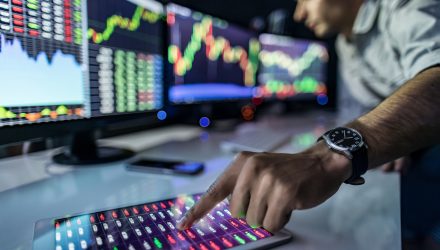 My son Jamie was recently hiking in New Hampshire’s Presidential Range. Upon return, he remarked how beautiful and enjoyable the hike was, but he also voiced frustration. He noted that it was frustrating to look ahead and summon the strength to reach the apparent summit through all the ups and downs, only to realize there was another peak not too far ahead. To quote Jamie directly: “You never know when you have actually reached the peak”. Welcome to investing!

We currently find ourselves in a predicament very similar to Jamie’s. After nearly a decade of enjoyable equity returns, with a few false peaks along the way, we find ourselves at what seems like another potential peak. Unfortunately, we don’t have the ability to look far enough ahead to determine whether we’re actually at the summit.

A quick look at the S&P 500® Index and the MSCI ACWI ex-U.S. Index will lend perspective: 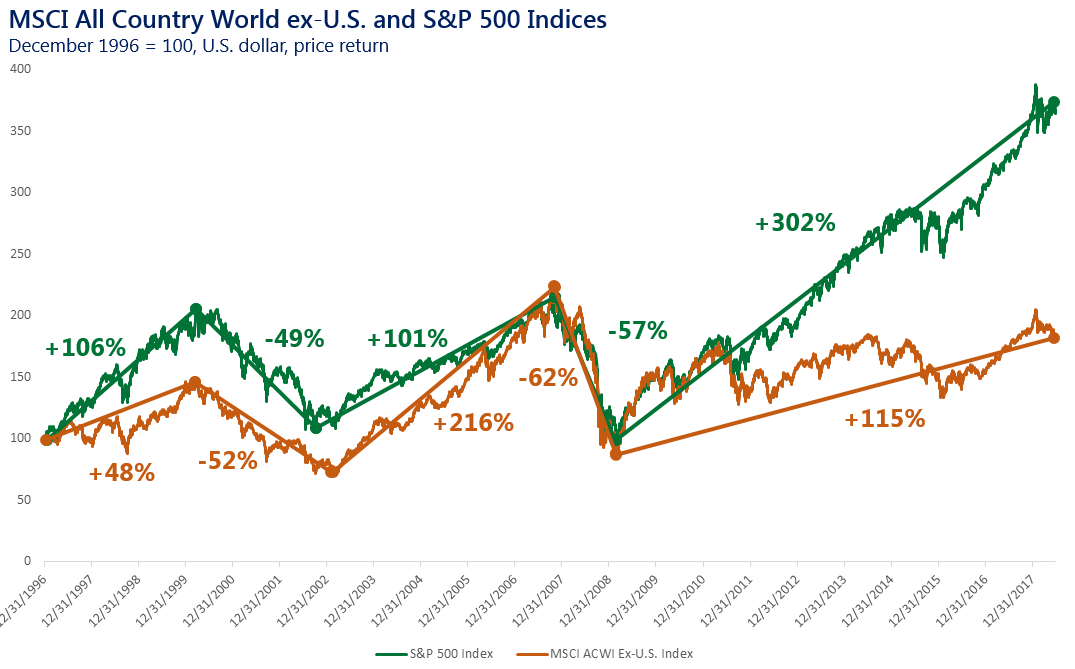 The stock market is a forward-looking mechanism. It is less interested in the current earnings of companies but instead focuses on future earnings. Investors often focus on imperfect measures such as company guidance, economic policy and sentiment indicators which are often backward looking or extrapolated. The markets, in comparison, constantly sift through a much larger and more diverse cauldron of domestic and international economic, political and other data. While we caution placing too much weight on the market’s short-term movements, we would never advise investors to completely ignore them.

As we have written and blogged about extensively, the threat of a global trade war has the markets on edge. The MSCI ACWI Index ended the quarter 8% off of its most recent high as the rhetoric intensifies. The synchronized global growth story of the past year has given way to stress in several developed European nations, and many emerging market nations. Fundamental conditions in the U.S. remain strong, reflected by the S&P 500 Index’s shallower drawdown, but we are by no means insulated from the deteriorating conditions found in much of the rest of the world.

To reiterate the point above, fundamental conditions in the U.S. (although in many cases backward looking) remain strong. U.S. equities have experienced strong earnings growth, and enjoyed the benefits of the corporate tax cut, under the backdrop of ample liquidity and reasonable interest rates. Employment remains strong, bolstering the consumer and supporting a robust housing market in many states. The Atlanta Fed’s GDPNow most recently estimated Q2 real GDP growth of 4.1% annualized. While one quarter is not indicative of a trend, U.S. small cap equities, typically more reflective of domestic economic conditions, have realized strong performance year-to-date as well.

Despite all this, a dichotomy remains between the apparent strong fundamental conditions in the U.S. economy and interest rates. Long-term interest rates are generally viewed as the market’s estimate for long term economic growth and inflation. The Federal Reserve has continued to push short-term rates higher as the committee shares our favorable interpretation of the economic data. Yet, changes in long-term rates have been much more muted. As short-term rates rise faster than long-term rates, the yield curve has continued to flatten. In the event that the yield curve inverts (short-term rates become higher than long-term rates), historically a significant market correction or recession has occurred the next 10-24 months(1). 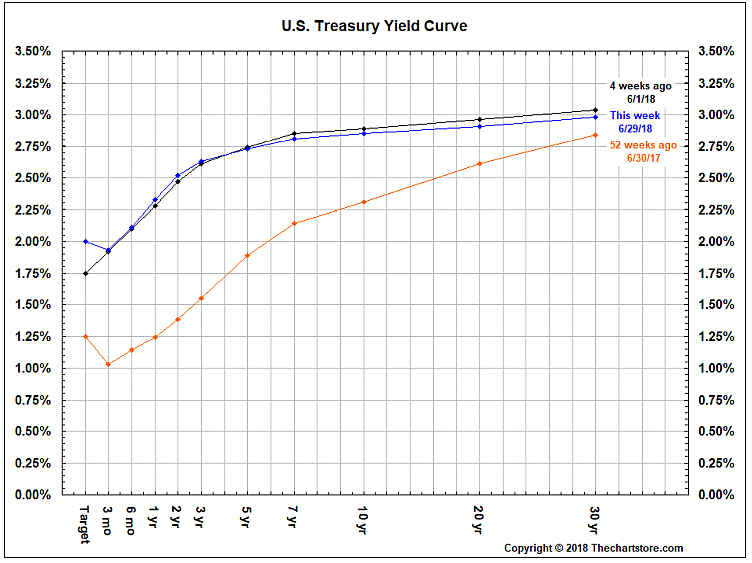 The chart below shows that every recession since the mid-1970s (the shaded regions) was preceded by an inverted yield curve with the two-year note yield exceeding that of the 10-year(2):

Taking all of this information into consideration we continue to feel cautiously optimistic. The markets like to “climb a wall of worry” and certainly the Federal Reserve’s monetary tightening or the escalating trade war is providing plenty of fodder. In our opinion, cautious optimism is the most prudent state of mind for the successful investor. Although the market usually goes up, rewarding optimism, it certainly can be punitive as well. We believe it is important to exercise caution by following an unemotional, rules-based system in preparation for this eventuality.

As students of history, we can look at what has happened in the past and use this knowledge to make an educated estimate of the potential distribution of outcomes in the future. Our philosophy is summarized by a well-known quote often attributed to Mark Twain: “history does not repeat itself, but it often rhymes”. Each cycle is different, we know the good times will end, but what we don’t know is the when.  We may not know in advance whether we are at the summit, or just another false peak. Instead of trying to determine when we’re at the top, we focus on having a plan for once we’re on the other side.