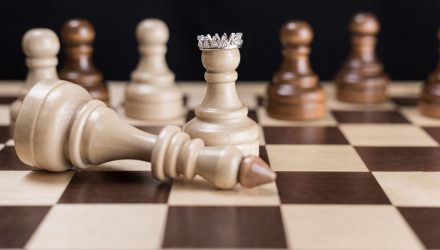 “It is more sekyr [certain]a byrd in your fest, Than to haue three in the sky a‐boue.” – John Capgrave’s The Life of St Katharine of Alexandria, 1450

The last four months have seen investors move from a futurity (new word for us) approach to a more here-and-now approach. The prices of companies focused on future market dominance at the expense of current profitability have been under severe pressure, while more established companies with visible profitability gained newfound respect. The advent of rising interest rates appears to be pushing investors to value money on a current basis rather than on the dreams of the future.

We are believers in the idea that money is a commodity and, much like any other commodity, its value is dependent on the supply of it and the demand for it. In times of easy money (i.e., low interest rates), the holder does not see money as sacred and can afford to invest it in longer-term (i.e., speculative) assets. And, like other commodities, during plentiful times, people use money less judiciously. However, when money is harder to come by and more expensive, investors start putting their precious funds in more near-term vehicles, never wanting it far from them. In such times, investment discipline comes back into favor.

A big change in the interest rate regime—from consistently lower rates with relatively consistent economic expansion (review our newsletter on the NICE period)—to something less nice (e.g., higher rates and uneven economic growth), needs to be respected. And that respect requires exploring the implications of the shift.

In the investing world, we assess an asset’s sensitivity to rising rates using a measure called duration. Duration is predominantly used to discuss fixed income instruments because they have a set lifespan with predefined income streams. However, duration can be used to assess any asset class since any asset has some expectation of productive life, by which we mean the ability to provide income to the asset owner.

A bit more on duration…

Now that this (brief) economics lesson is done, let’s get back to the reason duration matters.

The longer a bond’s life, the longer its duration. And in the case of equities, which we want or expect to have a very long life (measured in decades or hopefully lifetimes), duration is even longer, so their sensitivity to interest rate movements is much higher.

To demonstrate the sensitivity of various assets, we looked at how they have responded to past interest rate regimes. We do not directly use the chart below in Auour’s risk-regime algorithm, but it does a nice job of showing why we do what we do.

For purposes of this newsletter, we look only at the period from 1990 through March 2022. Although that time encompasses most of the bond bull market, there were short periods within it where inflation showed itself and the Fed fought it with higher rates. Ideally, we would include more data prior to 1990, but doing so would make comparisons with recent times difficult because economic dynamics were different as the dollar went off the last vestiges of the gold standard.

For the 32-year span, then, we defined a rising-rate regime (characterized by Fed tightening) by the acceleration of the consumer price index and the near-term Treasury market rates’ expectation for future rate moves. Within that timeframe, there were five episodes of Fed tightening. That’s not a lot of data points from which to draw strong conclusions, but the results are eye-opening, nevertheless.

We first look at the experienced return and risk of different types of assets during those periods (within the 32-year span) of lower or neutral rates (i.e., an accommodative rate regime, so not when the Fed is tightening). The graphic below depicts what we know as a typical association between assets: assets with higher volatility (and higher assumed duration) produced higher returns. More stable and secure investments, such as short-term bonds from the U.S. Treasury, produced low relative returns, but at a much lower level of volatility and duration. On the opposite side are emerging market equities, where investors were betting on future growth and future profitability. 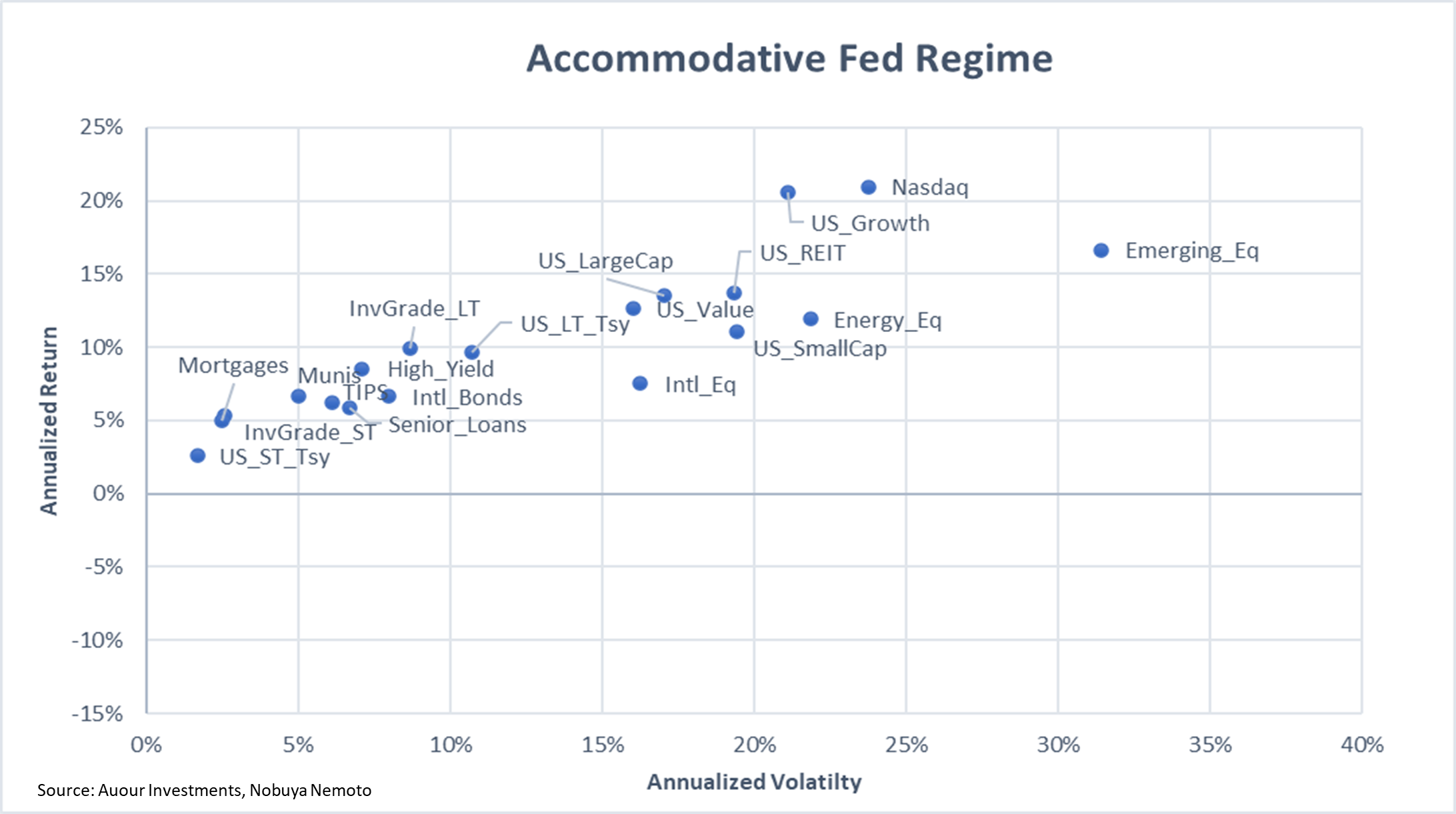 The next chart presents the same timeframe but during periods of rising rates and with a Fed focused on tightening monetary conditions. This chart shows the same assets but with a noticeable change in their experienced return. Although their duration and volatility are almost aligned with the accommodative regime time periods, the experienced returns are dramatically lower and, in most cases, negative. 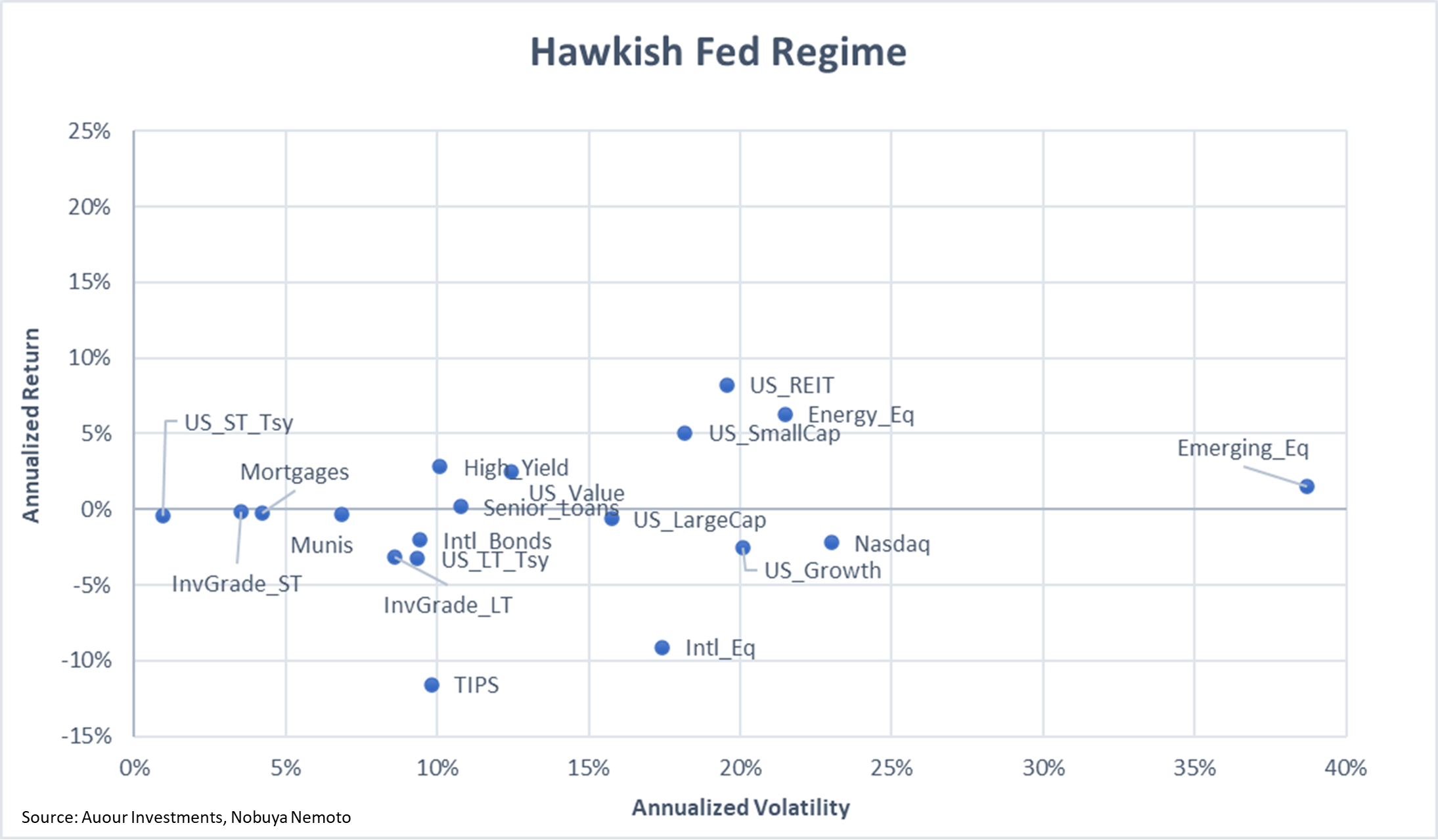 In this chart, investors’ desire for more near-term payoffs is reflected by the shunning of assets dependent on the futurity of profits and market dominance.

The above two graphs are likely the best visualization for why we believe in regime-based investing—that there are distinct periods, or regimes, that can bring about very different outcomes. Our ability to determine those regime shifts provides an opportunity to optimize client funds for different market environments. The next two graphs illustrate why we move into higher levels of cash as our primary defensive mechanism and look cockeyed at the traditional belief in static asset allocations.

In building portfolios, the interplay between different assets is critically important. If the assets held happen to react the same in all environments, there is little diversification provided and the entire portfolio may suffer from an adverse event. It is a mainstay in the investment world that we must understand that interplay to protect against correlation in returns when one is hoping for a more diversified positioning.

The graphs below highlight the correlations amongst various types of assets. The darker the shades of blue, the more the two corresponding assets will move in concert. The lighter the color, the more the assets will move independently. One can see, in the graphic on the left, the overall area of blue shading is lighter (i.e., less correlated), and equities and fixed income classes are relatively independent of each other. 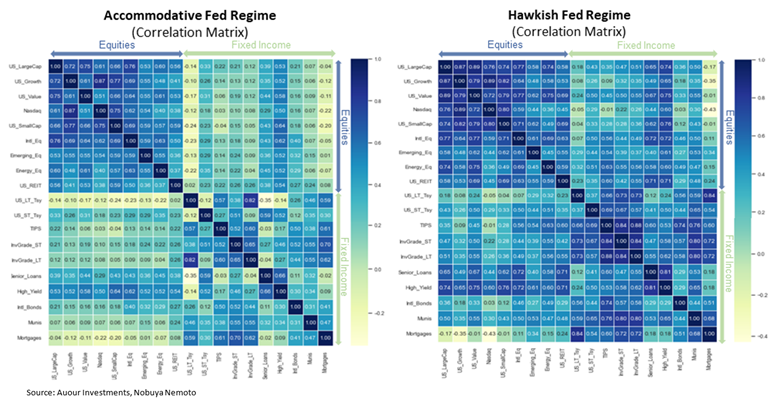 However, in the graphic on the right, one can see that when we have experienced higher sustained inflation—and a tightening cycle in interest rates ensues—there is a higher level of correlation between all assets. Another way to say this: in times of increasing interest rates, investors become increasingly risk averse, no matter the asset type, and they look for areas of safety, of which there are few besides cash.

Immense wealth has been built over the ever-lower interest rate environment of the past four decades, with just short and infrequent episodes of rising inflation and rising rates. This success established a consensus on how wealth is created through leverage and time to amplify the return of rising asset prices. But what if a change in the regime from ever lower rates moves to one with ever higher rates? Our experience is that the victors of past market regimes may become the victims when the winds change direction. For us, we need to take a critical view and be respectful of longer economic history, which spans more than just one half of an interest rate cycle.

The NICE period likely produced an anchor bias over the past 40 years of lower rates, and it has embedded itself into our perceptions of reality. Inflation and rising rates will change what we think is normal. Of course, the problem with calling a change in regimes is that what has occurred for 40 years can always continue for a bit longer.

We cannot predict with precision the changing regimes the investment cycle will experience but we have built in safety features that allow us to buffer portfolios during times of instability and changing risk attitudes. Over the past six months, we have become increasingly conservative with cash balances comfortably above 25% of all strategies. We are waiting for opportunities to reinvest as opportunities present themselves.