You are at:Home»ESG Channel»Solar ETFs Shine as EU Outlines Plans for Energy Independence 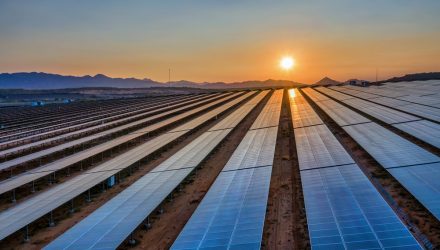 Among the best-performing non-leveraged ETFs of Thursday, the Invesco Solar ETF (NYSEArca: TAN) advanced by 5.5% and the Global X Solar ETF (RAYS) increased 7.2%.

The European Commission has submitted a €300, or $318, billion plan to eliminate Russian energy imports by 2027, but this would also require short-term investments in new fossil fuel infrastructure as a stop-gap to diminish the fallout from replacing imports of Russian oil and gas, Climate Home News reports.

“Putin’s war is, as we all see, heavily disrupting the global energy market,” European Commission President Ursula von der Leyen said, adding that it has shown Europe’s dependence on imported fossil fuels and the vulnerability that comes with it.

“We must now reduce as soon as possible our dependency on Russian fossil fuels. I’m deeply convinced we can,” von der Leyen added.

The proposals include increasing the EU’s renewable energy target to 45% by 2030, or up from the previous 40% target. The plans also make solar panels mandatory for public and new residential buildings by 2025 and 2029, respectively.

European Union officials argued that solar power was “the kingpin” of efforts to become energy independent by 2027, the Wall Street Journal reports.

“It is more urgent than ever that Europe become master of its own destiny, increase its resilience and sovereignty and continue to lead the world in facing the climate crisis,” EU climate chief Frans Timmermans said.

Additionally, Europe aims to build its own local photovoltaic panel supply chain with a strategic alliance, similar to the one in 2017 for electric-vehicle batteries. The previous strategic alliance has been successful so far, raising EU EV battery production capacity from 0% in 2017 to a projected 25% of global supply by 2030, according to Anna Darmani from Wood Mackenzie.