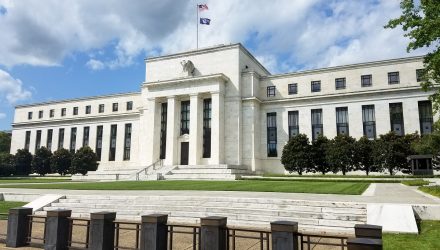 U.S. markets are flat Tuesday ahead of a Fed announcement on Wednesday and a jobs report on Friday, giving markets and investors a plethora of news and data to process.

“This is the week the Fed will meet to decide interest rates, and probably wishes the meeting was next week,” said Steve Liesman on CNBC. “Key economic data will be reported either on the second day of the meeting or after the decision comes out on Wednesday. ADP and GDP come out on Wednesday, and they’re both looking to be soft.”

Just 80,000 is predicted for the ADP payroll number, while 1.6% is predicted for the third quarter GDP, and the jobs report on Friday anticipates just 85,000 new jobs. Meanwhile the ISM Manufacturing Index is estimated to be at 49. This index, which monitors changes in production levels from month to month, has generated concerns of a recession recently, and although becoming stronger is still predicted to remain below 50, which is a sign of contraction in the manufacturing world.

In mid November, the China trade war saga will also continue, when President Trump and President Xi are likely to meet in South America, generating more questions about the future of the economy for the Federal Reserve.

Collectively all this uncertainty could suggest that there will be another Fed rate cut, which is also supported by the October FedWatch Tool, which currently shows the probability for a rate cut on October 30 at 95.1%, whereas it was less than a 50% probability just a month ago.

According to a Goldman Sachs forecast, the Federal Reserve likely will slice interest rates once again this week, but with this move it may be heading in a new direction, aimed at signaling that the current easing cycle could be over.

“Strong signaling from Fed leadership indicates that the modest trade war de-escalation since September has not deterred them from completing a 75bp, 1990s-style ‘mid-cycle adjustment,’” Goldman economist Spencer Hill wrote in a note to clients.