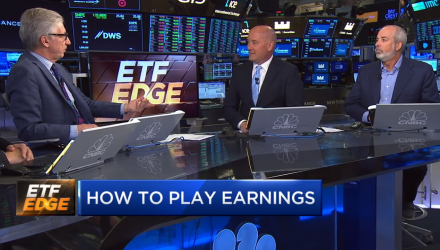 With transport trucking behemoth J.B Hunt set to report earnings after the closing bell today, the transportation group is in focus today. Many of the biggest players in the sector have been beat down over the past year including Fedex and XPO Logistics.

The Dow theory postulates that the stock market is on the upswing when the Dow transportation average and the Dow industrial average make new highs, either simultaneously or shortly after one another. Thus, the iShares Transportation Average ETF (IYT), which tracks the transport sector, and is one of the most closely watched ETFs.

ETF Trends CEO Tom Lydon and Ric Edelman of Edelman Financial Engines each weighed in on CNBC’s Halftime Report on Monday with anchor Bob Pisani to give their takes on how transports are being affected, and where the best opportunities lie in the current economic environment.

Lydon explained how trade is hindering performance for the transports.

“Well I think trade is a big deal here. It’s probably going to be negative,” Lydon said. “However, if you look at the IYT, as you mentioned Bob, the two biggest holdings were actually rails. And they were actually up 25% and 26% respectively.  So IYT is almost performing as well as the S&P year-to-date. But if you look at those stocks right now, like the shippers they’ve kinda been stopped in their tracks.”

Edelman agrees with the sluggish display from the transport stocks, but suggests that it may offer opportunities as well.

“We’re seeing a display by these individual stocks under-performing,” Edelman said. “Fedex, one of the most admired, respected, successful companies, suffering dramatically, losing 30% in a year when the S&P is up 20%. So it demonstrates that no individual stock is safe. And you need to recognize that it creates opportunities at the same time, if you were so inclined to take advantage of those market movements.”

“But the real key is that the transport industry is increasingly a commodity,” Edelman said. “Even a brand like Fedex. I don’t really care. I wanna get my package from here to there. And I’m gonna do it with whoever’s gonna  provide that service cheaper and faster. And brand really doesn’t matter anymore.”

Both experts seem to feel that the tariff situation will be resolved shortly and will offer opportunities as a result.

Edelman said there was no question that tariffs were temporary.

“There’s no way that governments around the world are going to tolerate this,” he said. “We’re seeing a dramatic reduction in productivity. China’s already suffering the biggest losses in it’s gains over decades now. The U.S. is beginning to be harmed. And when we move into the election, there’s no way that the government’s going to sustain this activity.”

Lydon suggested that some of the best shots for investors may be in emerging markets.

“As Rick said, if this trade deal gets done, there is gonna be some great upside, not just here in the U.S., but especially overseas,” Lydon said. “I’d look to emerging markets. We saw the trade numbers and how bad they’re impacting China today. Boy there’s gonna be great opportunity.”