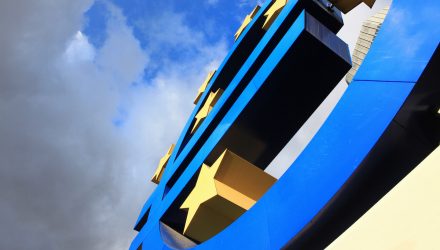 The iShares MSCI EMU ETF (CBOE: EZU) and other Eurozone-focused exchange traded funds are trading higher this year. EZU, one of the largest funds in that group, is higher by almost 9% and some market observers are betting on more monetary stimulus by the European Central Bank (ECB) to prop up the region’s fragile economies.

A frequent battle cry of those bullish on European equities is that the region’s stocks offer attractive valuations relative to the U.S. For its part, EZU has a price-to-book ratio of 1.52 and a price-to-earnings ratio of 12.92. The comparable numbers on the S&P 500 are 3.16 and 19.74.

“We believe the European economy requires ongoing monetary policy support. Why? There was a marked slowdown in economic activity last year and inflation remains subdued. Hence tighter financial conditions would pose a risk to the region’s growth,” said BlackRock in a recent note.

“Tighter financial conditions could push euro-zone gross domestic product (GDP) growth marginally below trend if they persist, we estimate. Data already suggest that Germany, Europe’s largest economy, stagnated in the second half of 2018. Euro-zone growth slowed to a standstill in late 2018,” according to BlackRock.

EZU holds nearly 250 stocks with France, Germany and the Netherlands combining for over 73% of the fund’s geographic exposure.

Related: Italy ETFs Have Been Outperforming

“We see the risk of a broad recession in the region as remote given the European Central Bank’s (ECB) already extra-easy policy, fresh fiscal stimulus and the lifting of the adverse one-off factors mentioned above,” said BlackRock. “Yet markets might be rattled by the lack of policy levers to counter a new downturn. The main worry is probably less an actual recession than the fragmented political and financial landscape in which it would play out.”

France and Italy, the Eurozone’s second- and third-largest economies, are already taking stimulus steps, but both have deficit issues to consider.