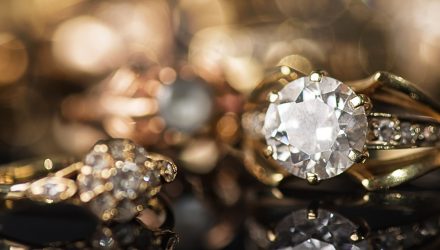 Could Tiffany & Co Be A Hidden Treasure?

Luxury jeweler Tiffany & Co recently slashed its profit outlook for the year, citing dramatically lower spending by tourists at its stores around the world as the reason it missed quarterly same-store sales estimates. Despite the news, the nearly 200-year-old company reassured Wall Street that the second half of the year could show improvement.

One analyst believes now could be the time for Tiffany to shine, and investors searching for an underdog might take a closer look.

Lindsey Bell of CFRA Research on Tiffany said on CNBC, “I’m going for Tiffany. Our stock analyst just upgraded this at the beginning of the month. Look, a lot of bad news is priced into this stock. They reported a weak Q1, they cut guidance, and it’s trading at 18.2x on a forward basis. It’s under-performing the retail sector in general and we like it because we see sales in general improving in the second half. The one bright spot in the earnings report was that the local sales, the domestic sales were very good.”

The New York-based company claimed that tourist-related sales in the Americas were off about 25% from a year ago, with sharper declines specifically among Chinese tourists.

Chinese tourists, who account for over one third of global sales of luxury products, are spending more domestically, encouraged partly by government attempts to improve consumption by cutting VAT or import duties. In addition, the number of visitors from China to the United States fell in 2018 for the first time since 2003.

“The Chinese government is pushing for local consumption and we will keep on focusing on our marketing in China because there is a very strong demand there,” Chief Executive Alessandro Bogliolo told Reuters recently.

Still, with a recent campaign from celebrity Kendall Jenner, in an attempt to appeal to a younger crowd, some analysts claim that a lot of the negative trends have already been priced into shares, which have fallen 12% since reporting results in March. Tiffany also said e-commerce sales continued to grow faster than its overall business, and it therefore plans to launch an e-commerce enabled website in China to cater to the fast-growing market.

“Tourist spending, trade, China, that’s still obviously going to be an overhang on this sector. But I think once you get sales going, you’re going to get margins improving. They guided for flat margins. We think that’s really conservative given the tailwinds they have from product costs as well as mix and other things. So I think this is something investors should consider going forward,” Bell added.

The Invesco Dynamic Retail ETF (PMR) is one fund that investors looking to use ETFs to play Tiffany could investigate.