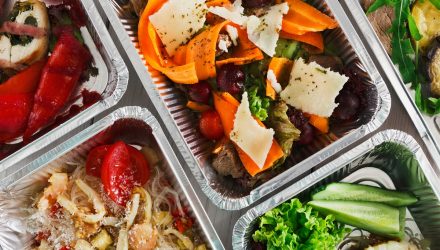 Blue Apron Soars As Beyond Meat Added To Menu

Shares of meal-kit company Blue Apron Inc., the meal delivery service, jumped on Tuesday, after the company said it would start adding Beyond Meat Inc.’s plant-based proteins to its menus beginning in August, sparking a round of short covering that drove the stock off its lows.

Blue Apron stock has shown quite a bit of potential according to Newsheater which says, “In the 100 days of trading, APRN managed to top a 12.53% Moving average. Additionally, Blue Apron Holdings, Inc. shares have achieved a 52-week range between 6.10 and 58.35 alongside 100 days raw stochastic set at 42.16%.”

While short selling interest in Blue Apron has increased 117% in 2019, according to financial analytics firm S3 Partners, as the stock has dropped precipitously, in July, the number of shares shorted fell by 132,000 as traders covered some of those positions when the stock rose 13% following its reverse split.

Joining forces with Beyond Meat offers Blue Apron exposure to a company and product that is proving surprisingly popular with consumers, as well as investors.

“We know a growing number of customers are interested in plant-based proteins, whether as an alternative to meat, a desire to explore a new ingredient, or an opportunity to make more sustainable food choices,” Blue Apron Chief Executive Linda Kozlowski said in a statement.