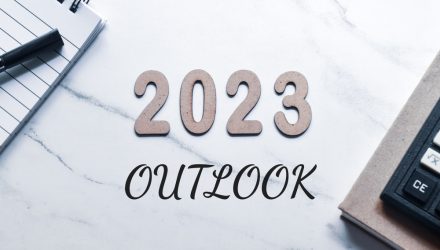 Despite weakness in December, the midstream/MLP space ended the year with solid gains to significantly outperform the -18.1% loss in the S&P 500 on a total-return basis. The Alerian Midstream Energy Index (AMNA) and Alerian MLP Infrastructure Index (AMZI) posted total returns of 21.5% and 31.4% for 2022, respectively, marking two straight years of 20+% gains and outperformance relative to the broader market. Looking ahead to this year, the key question for midstream/MLP investors is whether this space can continue to move higher. While the macro outlook is clouded by recession risk, company-level tailwinds from free cash flow generation should remain intact even if commodity prices see downward pressure, and midstream may be the best energy subsector for riding out a recession. Today’s note provides a 2023 midstream/MLP outlook, including tailwinds, potential catalysts, and risks.

Given midstream’s fee-based business model, some predictions for 2023 are relatively easy to make. Energy infrastructure companies are largely expected to continue generating free cash flow, regardless of where oil and natural gas prices trade. There is the potential for growth capital spending to creep higher, but companies are likely to remain broadly focused on capital discipline and delivering free cash flow. With that excess cash flow, dividend increases and buybacks will remain important tools for returning capital to investors. A handful of companies have already announced or provided guidance for dividend increases for 2023 as shown in the table below. For context, at year-end, AMNA and AMZI were yielding 6.1% and 7.6%, respectively. Equity repurchases are likely to continue in 2023, with any weakness providing opportunity for companies to be more active with buybacks. Through the first nine months of 2022, midstream companies repurchased over $3.1 billion in equity in aggregate, and approximately three-fourths of AMNA and AMZI by weighting have repurchase programs in place. 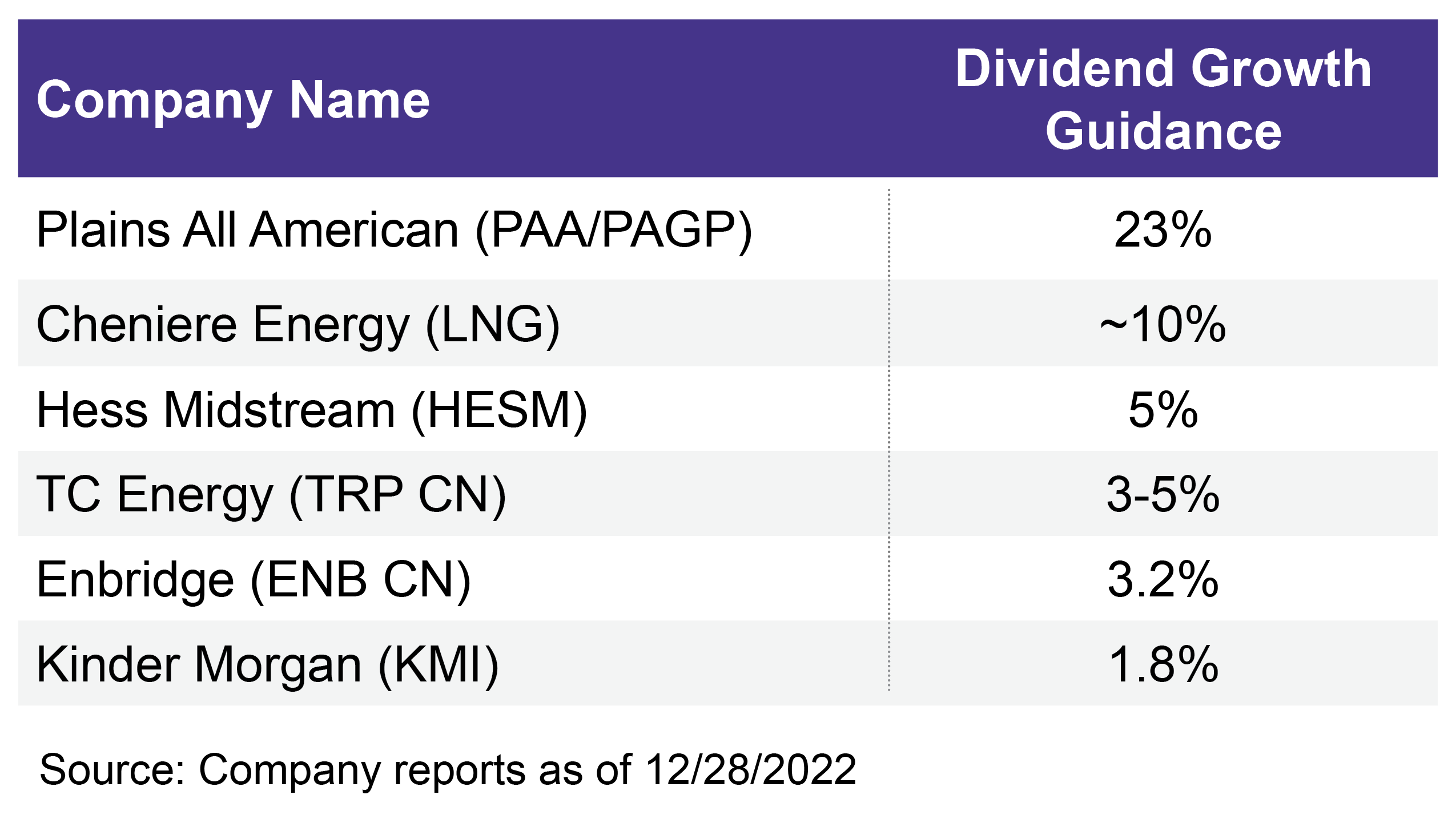 Though there are several crosscurrents, energy markets are likely to remain tight in 2023. Key focus areas will be a rebound in Chinese demand over time, and on the supply side, Russian export levels bear watching as the EU’s oil embargo continues and the refined product embargo takes effect in February. The absence of significant strategic oil releases from the US and allies also results in less barrels on the market. US benchmark oil prices ended 2022 up 6.7% to $80 per barrel (bbl), which is well below the 2022 high of $123.70/bbl seen in March. Tight markets could support an upward bias in oil prices, but the impact of a recession on demand remains a risk (discussed more below).

US oil production growth is likely to remain measured due to both producer capital discipline and constraints in the oil patch. The Energy Information Administration (EIA) forecasts that US oil production will increase by ~0.5 million barrel per day (MMBpd) to average 12.3 MMBpd for 2023. Moderate US production growth remains arguably a goldilocks scenario for midstream. Companies have more volumes to handle, providing operating leverage and pockets of growth opportunities, but production is not high enough to drive down oil prices and hurt energy sentiment.

For US natural gas, solid demand supported by exports and steady production growth should continue to benefit midstream in 2023. US natural gas prices fell by 35.4% in December to close the year at $4.48 per million British thermal unit (MMBtu). Prices will be taking cues from the weather through the balance of the winter, while also digesting the incremental demand from the restart of Freeport LNG, which could tighten the market upon expected restart in the second half of January 2023. The EIA estimates that US natural gas production will grow by 2.5 billion cubic feet per day (Bcf/d) or 2.3% this year. Generally, natural gas prices are expected to remain elevated relative to the long-time range of $2-3/MMBtu seen for much of the last decade given continued producer discipline and the demand pull from LNG export facilities (read more).

What are potential catalysts for energy infrastructure?
When thinking about what could drive midstream stocks higher in 2023, there are potential catalysts beyond rising oil or natural gas prices. Continued execution by midstream corporations and MLPs in generating free cash flow and returning excess cash to investors through dividend increases and buybacks can be supportive for the space. This developing track record of generous shareholder returns likely garners attention over time and could drive a re-rating in equities. The announcement of capital allocation frameworks, similar to those made by Cheniere Energy (LNG) and Plains All American (PAA) in 2H22, could also give equities a boost (read more). Given real asset exposure and inflation adjustments often built into contracts, ongoing inflation could also drive more investor dollars into the space.

A recession remains a key risk, but midstream/MLPs likely to be defensive.

While there are many reasons to remain constructive on energy infrastructure, there are potential risks to a rosy outlook. Namely, the impact of a recession on energy demand remains a key risk entering 2023. If there is a deep recession, energy stocks will likely come under pressure as commodity prices tend to fall due to weakened demand from an economic slowdown. That said, oil prices could potentially be helped by OPEC+ production cuts to offset demand weakness, or to some extent, refilling the US Strategic Petroleum Reserve could lend some price support. Given tighter energy markets as many buyers shun Russian supplies, commodity prices could be more resilient in a recession than typical.

Importantly, midstream would be expected to hold up better in a recession than other energy sectors given its defensive qualities. Namely, midstream benefits from its fee-based business model with long-term contracts and the resulting steady cash flows. For context, MLPs saw gains during the 2001 recession and held up better than broader energy and the S&P 500 in the 2007-08 financial crisis (read more). Investors anticipating a deep recession may consider tilting more of their energy exposure toward midstream/MLPs to take a more defensive position.

Energy infrastructure companies have seen two years of solid performance, and the positive momentum can continue into 2023 given the ongoing benefits of free cash flow generation and the potential for a supportive macro backdrop. While recession risk clouds the macro picture, midstream is likely to hold up better than other energy subsectors in a recession.

US LNG Projects a Mixed Bag Despite Strong Backdrop

Midstream Investors Can Give Thanks for 3Q22 Buybacks

The Benefits of Capital Allocation Frameworks

AMEI is a subset of AMNA and includes 25% MLPs and 75% US and Canadian midstream C-Corps. AMEI is used here for its longer index history than AMNA.

VettaFi.com is owned by VettaFi, which also owns the index provider for ENFR, AMLP, MLPB, ALEFX, and AMNA. VettaFi is not the sponsor of these products, but VettaFi’s affiliate receives an index licensing fee from the sponsor.