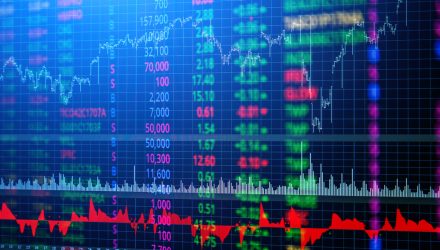 Emerging markets equities aren’t setting the world on fire to start 2022, indicating that there’s a long to way to go in this redemption story. However, there are some positive signs developing.

If those signs continue to mount and materialize into something more significant, an array of exchange traded funds, including the Emerging Markets Internet Ecommerce ETF (EMQQ), stand to benefit. As its name implies, EMQQ focuses on internet, e-commerce, and related activities in developing economies.

“Some of the world’s biggest funds are switching toward emerging-market equities in a bet their central banks have less need to raise interest rates after tightening before their developed-nation peers last year,” reports Bloomberg. “Goldman Sachs Asset Management and BNP Paribas Asset Management are among those buying the shares on expectations the most attractive valuations in more than a decade will help halt four years of underperformance versus their U.S. counterparts.”

Some of the countries represented in EMQQ, including Brazil, raised interest rates last year to ward off inflation. A dozen of the 20 biggest developing nations now have higher benchmark lending rates than they did a year ago. With some developing markets central banks beating the Federal Reserve to the rate hike punch, market observers believe that could provide room for emerging markets equities to appreciate in 2022.

“Emerging-market shares may be due to play catch up. After rallying along with their developing-nation peers in the recovery from the pandemic shock in 2020, they fell behind last year due to the emergence of the delta and omicron virus waves and a slow pace of vaccinations,” according to Bloomberg.

Conversely, China recently lowered rates, but that could work in EMQQ’s favor because that signal from the Peoples Bank of China (PBOC) could be interpreted as a sign that Beijing wants to stimulate economic growth. That’s meaningful to EMQQ investors not only because the fund is heavy on consumer-oriented stocks, but also because China is its largest geographic exposure at 51.6%, according to issuer data.

“EM economies may be poised for stronger growth in 2022, particularly those at earlier stages of reopening,” writes Goldman Sachs in a recent report.