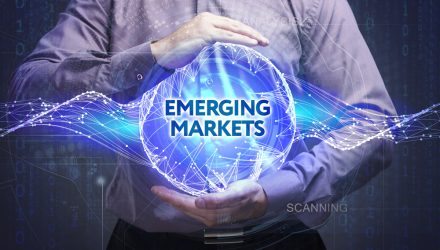 There’s no denying that this is weighing on exchange traded funds heavy on Chinese internet names, but the long-term thesis for ETFs such as the Emerging Markets Internet and Ecommerce ETF (EMQQ) remains compelling, and this year’s weakness in consumer-driven and internet stocks in developing economies may ultimately prove to be a boon, not a reason to ignore the category.

In more sanguine environments, EMQQ displays a penchant for beating traditional emerging markets benchmarks. Over the past three years, the fund is up 95.3%, or more than double the returns of the MSCI Emerging Markets Index over the same period. That’s a reminder of the investment potency and potential of the emerging markets consumer.

“We believe the investment opportunities in emerging markets are hard to overstate,” Polen Capital portfolio manager Damian Bird and analyst Pamela Macedo note in a recent research paper. “A McKinsey study estimates that by 2025 consumers in emerging markets will spend an estimated USD 30 trillion annually, a future it calls ‘the biggest opportunity in the history of capitalism.’”

A massive percentage of that consumer-driven opportunity is driven by the internet. Many developing economies, including large ones such as Brazil and India, lack the brick-and-mortar retail infrastructure that’s so common in other countries.

Conversely, emerging markets consumers are rapidly embracing online retail, with many proving to be eager buyers of goods via mobile devices. EMQQ provides direct exposure to that theme because its underlying index mandates that member firms must derive the majority of their profits from e-commerce or internet activities including search engines, online retail, social networking, online video, e-payments, online gaming, and online travel.

Alone, that sounds compelling, and while many investors often focus on the massive populations of China and India and favorable demographic traits of other developing economies, there’s more to consider. Notably, internet and smartphone penetration in many emerging markets, including tech-savvy China, is nowhere close to what it is in the U.S. or developed Europe.

This indicates that as more emerging markets gain internet access and advanced mobile phone technology, there’s a runway for growth for EMQQ holdings. In addition, discretionary over staples could be the way to go for long-term investors looking to emphasize emerging markets consumer trends.

“For investors in emerging markets, Bird and Macedo suggested taking an active approach and staying up-to-date with the latest shifts in consumer consumption in order to better identify opportunities. Right now, that means ‘investing in wants over needs,’ according to the paper,” reports Jessica Hamlin for Institutional Investor.