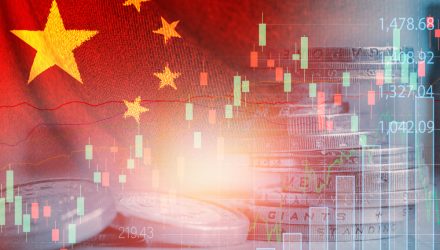 With signs emerging that Beijing is willing to play ball with U.S. regulators, which could avert delistings of some well-known Chinese stocks trading in New York, analysts are encouraged about the prospects for some battered Chinese growth names.

That could prove to be positive news for exchange traded funds such as the Emerging Markets Internet & Ecommerce ETF (NYSEArca: EMQQ). The China-heavy EMQQ is higher by almost 12% over the past month, a period including some potentially good news on the delisting front. That underscores the point that this is indeed a material issue for the ETF.

“We believe that easing geopolitical tensions and improving US-China cooperation over audit records for US-listed China ADRs should improve investor sentiment for this group of stocks,” says JPMorgan China Chief Equity Strategist Wendy Liu in a recent note. “Such a cooperative outlook is far more positive than spillover sanction fears in the past month.”

“Closer accounting and audit cooperation between the US and China should improve the quality of reported financials to benefit minority shareholders,” according to the bank. “Investors who agree with this positive view can consider expressing the view via the following custom basket.”

As a result, the bank is constructive on well-known US-listed Chinese internet stocks, including Alibaba (NYSE:BAB), Tencent (OTC:TCEHY), and JD.com (NASDAQ:JD). All three drew the ire of regulators in China last year, weighing on share prices.

“Regulators suspended Alibaba affiliate Ant’s massive IPO just days before the planned listing in November 2020. Then authorities fined Alibaba about $2.8 billion in April 2021 after an anti-monopoly probe,” reports Evelyn Cheng for CNBC. “Alibaba’s U.S.-listed shares have risen from 52-week lows hit on March 15, but are still down over 60% from just before Ant’s IPO suspension.”

“Although the stocks may have been included in JPMorgan’s basket play for a specific investment theme, the investment bank still rates the individual names underweight. That’s based on expectations of underperformance versus the analyst team’s overall coverage over the next six to 12 months,” according to CNBC.