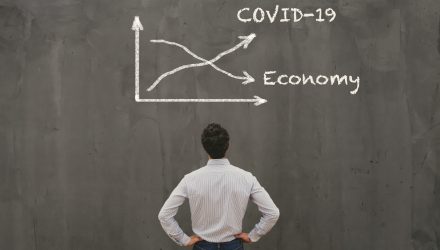 While many analysts and investors have been anticipating a “V-shaped” recovery in the economy, spiking coronavirus cases in major economies such as the U.S., Brazil, and India have demonstrated the delicate nature of the economic rebound and are suggesting a heightened risk of a “W-shaped” recovery, according to economists at research firm IHS Markit.

In its July World Flash report, IHS Markit Chief Economist Nariman Behravesh and Executive Director of Global Economics Sara Johnson increased their 2020 global growth forecast slightly to a 5.5% contraction, citing indications of a dramatic rebound in economic activity in May and June, following a precipitous but ephemeral recession. A 4.4% rebound is expected in 2021.

“Nevertheless, the logic underlying our forecast, of a ‘bounce and fade,’ has not changed. Consumers and businesses remain cautious,” Behravesh and Johnson said.

“Unless fiscal and monetary authorities provide more stimulus, a key support for the recovery will disappear soon.”

The Federal Reserve central banks around the world have doled out unprecedented levels of monetary and fiscal stimulus since the coronavirus crisis started, affecting a plethora of asset classes, from precious metals driving higher, as witnessed by the iShares Silver Trust (SLV)  and the  Aberdeen Standard Physical Silver Shares ETF (SIVR), to corporate bonds gaining in ETFs like the Goldman Sachs Access Investment Grade Corporate Bond ETF (GIGB).

IHS Markit projected that the eurozone will be the hardest hit region economically with an 8.6% decline in GDP (gross domestic product) this year, but the U.S. is still in a fragile spot, with the number of coronavirus cases increasing daily, including over 77,000 new cases confirmed on Thursday, according to Johns Hopkins University data, the highest single day tally of any country in the world. With such a dramatic spike in infections, a plethora of states have been compelled to reinstate partial lockdown measures to curtail the spread of the virus.

Nevertheless, the case total sits at 3.5 million and continues to increase, as similar localized restrictions have been instituted around the globe, including hotspots like Australia, mainland China, Germany, Israel, Japan, and Spain. Although there was initially optimism over increased consumer spending, IHS Markit underscored that high-frequency data on consumer purchasing patterns have predictably “rolled over,” suggesting a fresh increase in consumer caution, and a reduction in the likelihood of a V-bottom recovery.

“The new wave of infections has reduced the probability of a V-shaped cycle, something to which IHS Markit did not subscribe, and increased the risk of a double-dip recession (W-shaped cycle),” Behravesh and Johnson said in the report.

IHS Markit assigns a probability of around 20% to such a scenario, but depending on the pattern of infections, this risk could escalate in the coming months.

“The likely timing of a second downturn would be late this year or early 2021, and the economic contraction would probably not be anywhere near as severe as the recession we just went through,” the report said, citing improved virus management measures meaning less likelihood of widespread lockdowns.

“Bottom line: while the worst is probably behind us, the global recovery remains weak and subject to further downside risks,” the report concluded.