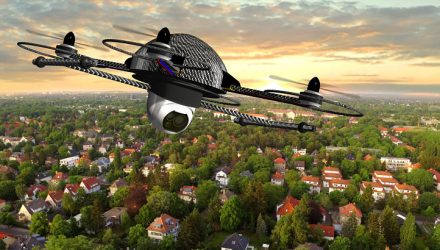 “As drone technology enters a cycle of ballooning growth, it is finding applications across many industries such as agriculture, construction, and utilities for purposes that were nearly unimaginable 10 years ago,” according to Equities.com. “In the construction industry, for example, the current value of labor and services provided by drones is estimated to be $127.3 billion.”

Related: Perhaps Smart Beta, By Itself, Is Not So Smart

IFLY currently holds 44 stocks and the ETF’s top 10 holdings combine for nearly half the fund’s weight weight. Familiar names among those top 10 holdings include Dow component Boeing Co. (NYSE: BA), GoPro Inc. (NASDAQ: GPRO) and Honeywell Inc. (NYSE: HON). Just over half of IFLY’s holdings are U.S. companies while most of the remainders are Asian and European firms.

“As a new and attractive industry, drones also have some weaknesses, including a lack of thorough regulation and big players to push the industry forward,” reports Equities.com. “It will become easier to predict the industry’s movements once these weaknesses are addressed, at least to some extent.”