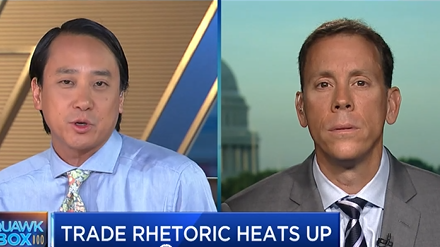 After snapping an eight-day losing streak last Friday, the Dow began the week back in the red by 300 points to start Monday’s trading session as U.S. President Donald Trump threatened to bar Chinese companies from making investments in U.S. technology.

It’s the latest barb as U.S.-China trade tensions continue to rack the markets, possibly sending the Dow on its ninth losing session in the last 10. Last week, the Dow fell over 400 points when President Trump threatened to impose a round of tariffs on $200 billion worth of Chinese goods “if China refuses to change its practices, and also if it insists on going forward with the new tariffs that it has recently announced.”

Peter Boockvar, the chief investment officer at Bleakley Advisory Group, said in a note there are three goals the Trump administration wants to accomplish with the latest round of tariffs:

“As for the first concern, we don’t seem to have made any progress addressing with the current tariff plan but are at least calling China out deservingly so. The 2nd one might be gaining some traction in bits and pieces and hopefully continues. The 3rd is only a symptom of everything else,” said Boockvar. “Either way, and regardless of how one thinks this should all be handled, the means to the intended end is immediately having negative real world impacts.”

The NASDAQ was down over 100 points in Monday’s early training session with tech companies, such as Intel, Micron Technology and Nvidia down by at least 1.5 percent. This drag in the tech sector was evident in PowerShares QQQ ETF (NASDAQ: QQQ) as it was down 1.65%.