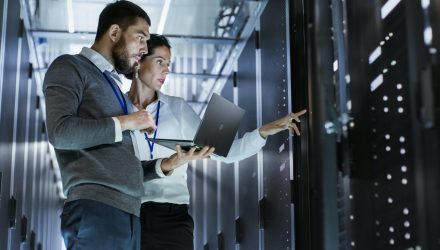 Does Tech Have More Fuel In The Tank?

Ian Young July 14, 2020
With the Nasdaq Composite notching fresh all-time highs Monday prior to a dramatic downturn, which it is still attempting to recover from, investors and analysts are becoming increasingly gun-shy about entering into technology, which has been a hot sector lately.
The index is struggling to hold above breakeven Tuesday, while the Invesco QQQ Trust (QQQ) is flat on the day, and the leveraged ProShares UltraPro QQQ (TQQQ) is showing a 0.5% gain on the day.
While some analysts see this downturn in the Nasdaq, which lost over 700 points in a day, as a normal retracement, others see this as more sinister.
“Anytime you have this much sort of aggressive positioning in one sector it’s going to be prone to the short term reversals. But one of the big debates in the market right now is between growth and value, and in particular whether technology and growth stocks really are going to have to see leadership to value and more cyclicals. In my view, that’s not going to happen in the very near term. We may get these short rotations, but in order for us to sustain value or cyclical leadership, we’re going to need to have a much better growth environment. And we’re still battling re-openings, returns to economic activity, and return to normal. And until we can have a significant acceleration in the economic picture, I think growth in some of these technology companies are going to be the ones that are putting up some of the better revenue numbers for the foreseeable quarters,” said Kate Moore, BlackRock’s Head of Thematic Strategy for Global Allocation and Investment Team on a segment on CNBC.
Josh Brown, CEO of New York City-based Ritholtz Wealth Management, has a different perspective of what a return to normal in the economy might look like however.
“I think people are dreaming. As I’ve said repeatedly on the show, I think what’s going on with the stock market away from technology much more accurately reflects the condition that the economy is in, which is terrible. And now we’re starting to see this level off and consumer confidence. We’re starting to see some of that exhilaration of the ride back up to normal see start to peter out. It’s happening in the data.“It’s happening a different stock sectors. And I think you only have to pick out two quotes from the two largest banks in America to truly understand what’s about to hit the stock market and sentiment,” Brown explained on the same segment.
Brown looks to the banking sector as a proxy for the true state of the economy going forward, citing one of its key pundits.
Jamie Dimon, CEO of JP Morgan said, according to Brown, “I’d say in the first quarter we were looking at a deep but short-lived downturn that focused on the most impacted sectors. Now we’re looking at more protracted downturn reserve for a much more broad-based impact.”
For Brown, this means the possible further deterioration of the economy in the near term, which would affect a plethora of sectors, including the stock market, real estate, and other major asset classes, as consumer sentiment worsens.