You are at:Home»Featured»Tesla Surges Again, Boosting Consumer And Industrial ETFs 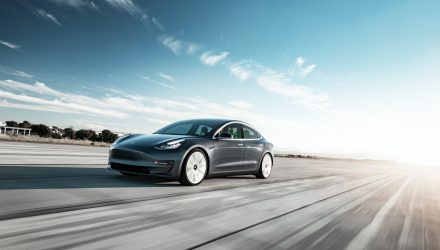 Tesla stock is surging on Friday, up 7.6%, and headed toward $900 per share, as it looks to close out an unprecedented 11th trading day higher.

In addition to boosting ETFs like the ARK Industrial Innovation ETF (NYSEArca: ARKQ), Tesla stock is up 36% over its 11 sessions of gains, the longest winning streak on record.

Tesla has helped ARKQ more than double in 2020 and while banking on a similar performance this year is tricky, the ARK ETF is starting the year on a positive note thanks to the Jonas call on Tesla.

“Despite the extraordinary run in the share price, we continue to believe that Tesla can outperform vs. our sector in 2021,” Jonas wrote in a note while reiterating his overweight rating on the stock. “In our opinion, Tesla is still the best-positioned company in EVs and AVs under our coverage due to its people, its technology, business model, and access to capital.”

Another reason ARKQ’s Tesla allocation is meaningful is that Elon Musk’s company consistently proves adaptable and is winning the EV battle in terms of $/charging rate, or miles of range added per minute of charging.

With the automaker’s stock surging, the company’s market capitalization has exploded to $824 billion, making Tesla the fifth largest U.S. company by market cap, and beating out Facebook’s market cap on Thursday. Tesla has gained over $105 billion in market value this week alone.

Earlier Friday, analysts at Evercore ISI upgraded their rating on the stock to from the equivalent of selling to holding, stating that they have been “on the considerably wrong side of (Tesla) for over a year now.”

Their neutral positioning is now in-line with the ratings of 15 out of the 37 analysts covering Tesla and surveyed by FactSet. Of these, 12 have a buy rating on the stock and 10 have a sell rating.

For five years, “we have viewed (Tesla) as a ‘growth + premium auto,’” an ‘attractive’ premium EV maker company that “would grow for a very long time & would sell x numbers of vehicles in x eventual outyear….but was still an auto company,” they said.

“In reality (hindsight & rationalization, never predicted), we believe tech/retail investors see (Tesla) as two separate tech companies,” one that is a market leader in electric vehicles and another offering driverless-car technology, solar-power stationary storage, battery and powertrain technologies and others.

Moreover, Tesla is “in the best position” to capitalize from any upside from climate initiatives from the new Biden administration and a blue Senate, the Evercore ISI analysts said.

Shares of the automaker have gained an incredible 796% in the past year, compared with gains of roughly 17% for the benchmark S&P 500 index, which Tesla joined recently.

Tesla’s rise is also good news for the iShares U.S. Consumer Goods ETF (IYK) since it is the fund’s top holding.