You are at:Home»Disruptive Technology Channel»Netflix Rallied 5% on Thursday as Investors Digested Mixed Earnings 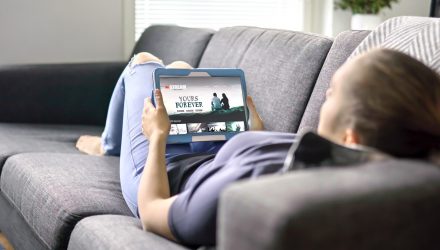 On Tuesday, Netflix reported fourth-quarter earnings that showed the company bested the top and bottom lines for the quarter, but offered disappointing guidance for the first quarter of 2020. The company also fizzled out when it came to meeting expectations for new subscribers in the U.S. and Canada. The mixed results led to NFLX ascending as much as 2.3% in after-hours trading on Tuesday, only to lose about 2% on Wednesday.

Netflix beat its own subscriber forecast, adding 8.76 million paid subscribers compared to its projection of 7.6 million. International growth was particularly robust, as the company added 8.34 million members outside the U.S. and Canada. Management also noted that the company was launching mobile-only plans in Malaysia and Indonesia, leveraging a strategy it had begun in India to attract more viewers under its umbrella.

Despite beating estimates in its subscriber forecast globally, the streaming media company fell short in the U.S., where it added just 420,000 new members. That was well below its own expectation of 600,000, and down from 1.53 million in the quarter a year ago.

Failure to meet domestic subscriber forecasts also suggest that the launches of recent competitors like Disney+ and Apple+ were having an effect in Netflix’s most pertinent market. In addition, the company’s subscriber growth forecast for the first quarter calls for just 7 million new members, off from 9.6 million in the first quarter of 2019, which showed a record for quarterly additions.

While competition has become a concern for many Wall Street experts, Marc Randolph, co-founder and first CEO of Netflix, told Yahoo Finance Friday that he feels Netflix has been, and will continue to be robust in the face of competition.

“I quite frankly don’t think Netflix feels threatened by any of these entries. I think they still continue to see their competition not Disney, not HBO Max, not Peacock, but they see their competition as other forms of television consumption,” Randolph said. HBO Max and NBCUniversal’s Peacock are each slated to launch later in 2020.

“I mean still more than half of TV now is consumed linearly, and all these companies will benefit from expanding into that category,” Randolph said. “I don’t think they feel they need to respond to these small new entries coming in. It’ll be a long while before that becomes any kind of a threat.”