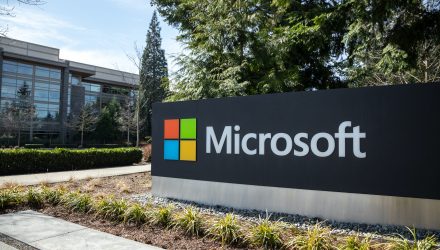 Microsoft Aids ETFs By Launching 7% After Surge In Cloud Services

Shares of Microsoft closed up 7% on Monday, beating out other major technology stocks on the day and launching some ETFs higher after the company disclosed a surge in the use of its cloud services on the 365 platform.

The tech behemoth implemented some significant changes to its Office software Monday, announcing that it is changing the suite’s name and adding major chat features for the average consumer. The changes are arriving at a time when team-based apps are becoming increasingly critical as people are increasingly working from home amidst the spread of the coronavirus pandemic, which has now spread to over 750,000 people.

While Skype is Microsoft’s primary communications app for consumers, it’s clear that the company is now focusing more on Microsoft Teams for both work and home.

Beginning April 21, Office 365 will be called Microsoft 365, in an effort to shift the company’s dated image and revamp it as a community-centered suite of applications. One of the most significant changes in that respect is the inclusion of the tech giant’s Teams software for everyday consumers. Until now, Teams have been primarily designed as a communication app for large and small organizations, similar to Slack.

The Teams app allows people to hold video calls and exchange chat messages like several of the other popular platforms such as Zoom and RingCentral. On March 18 Microsoft said Teams had added 12 million more daily users in the course of one week, for a total of 44 million.

“We have seen a 775% increase of our cloud services in regions that have enforced social distancing or shelter in place orders,” Microsoft said in a blog post published on Sunday. Microsoft’s Windows Virtual Desktop and Power BI services have seen upticks, the company said.

While many stocks have been brutalized in the market’s fall that starting in February, Microsoft is down just 1% for the month of March, while the Nasdaq has dropped 9% and the S&P 500 has plunged 11%. For all of 2020, the S&P 500 and Nasdaq have declined 19% and 13% so far, and Microsoft is still showing a profit of 1.6%.

Although many well-known ETFs such as the  SPDR S&P 500 ETF Trust (SPY), the SPDR Dow Jones Industrial Average ETF (DIA), and the Invesco QQQ Trust (QQQ) contain the tech monster, investors looking for ETFs to play Microsoft in a bigger way can try the Technology Select Sector SPDR Fund (XLK) and the Vanguard Information Technology ETF (VGT), which have substantial holdings in the company, and were up roughly 4% on the day Monday.