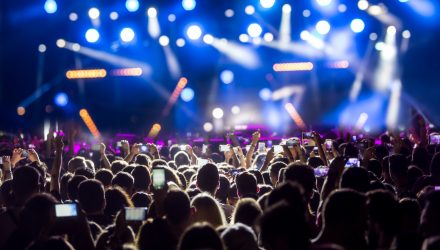 An ETF to Interest Music and Entertainment Fans

While the United States has begun to gradually reopen the country and infection rates have fallen, the pandemic fallout for small businesses has remained immense. The entertainment industry has been hit especially hard, with businesses like movie theaters and concert venues forced to close.

The North Park Theatre in Buffalo, New York, a local landmark that has been around for a century, surviving major economic shocks like the Great Depression and 2008 Great Recession, is one such place. The venue suffered dramatically when the coronavirus pandemic prevented patrons from attending performances.

Currently, the theater is awaiting a $200,000 grant it applied for under the Small Business Administration’s Shuttered Venue Operators Grant program, according to Ray Barker, the theater’s program director, who has been with the company since the 1990s, when he began there as a concession worker.

Like many other movie theaters and entertainment venues, North Park has reopened recently as pandemic restrictions lifted, but the financial assistance is critical to recovering from the massive debt it accumulated over the last year.

“The bleeding has not stopped for 13 months. This program was supposed to help us, and it has not,” he said. The theater’s application has been submitted, but for more than six weeks, Barker said he’d gotten no word on its status. On Tuesday, he heard from the SBA that the theater’s application was approved, with next steps to follow, but it is not yet clear when the funding will be received.

The SBA’s SVOG program, a $16 billion fund, was designed to help support the industry until in-person entertainment can resume. Music clubs, theaters, promoters, and more can access grants of as much as $10 million, based on gross revenue from 2019, as a part of the program, which was included in the second Covid relief package that was signed into law in December.

But the process has been riddled with technical issues, such as the program’s application portal opening and closing within hours of its debut on April 8, without any applications being submitted, only to reopen weeks later.

North Park is in the company of thousands of others. As of midday Monday, over two months after the initial launch of the SVOG, the SBA reported 1,445 grants had been awarded for a total of $833.4 million. The agency said in its weekly report that 7,118 applications remain in the submitted phase and 5,853 are in review. The combined requests represent $11.6 billion in grants.

“We could have been reopening sooner if we had the money, but right now it’s like we’ll be lucky to open when we’re scheduled to open,” he said. “By asking us to wait longer, you are asking all of our employees to wait to come back to work.”

This delay stands in stark contrast to other programs like the Paycheck Protection Program and the more recent Restaurant Revitalization Fund, where many recipients received funds within days of applying.

At a Senate hearing in May, new SBA Administrator Isabel Guzman testified that money would be arriving to businesses in need from the SVOG program soon, adding that the agency was in consistent communication with stakeholders. She also acknowledged early technical difficulties with the application portal.

“We are processing through those applications as quickly as possible. It’s a very complex program by statute, with various types of entities, which has created a lot of various eligibility requirements along the way … and requires intensive applicant-by-applicant review,” Guzman said.

“The SBA is supposed to help small businesses. Every day that they do not release that money, the conglomerates are helped,” said Fix Schaefer, who is also communications director for several independent venues in the Washington, D.C., area. “Our employees will go to them. … Bands will go to them. It’s not just 2021, it is for the next five to 10 years.”

“These venue operators have been without income since March of 2020. They’ve exhausted their savings. They have put second mortgages on their homes. They’ve drained their 401(k)s and their kids’ college funds. They’re taking loans that they would never normally take if they can, but they are exhausted — their options are exhausted,” she said.

For entertainment fans who are looking to invest in corporations that support artists and even donate to entertainment venues in times of crisis, there is an ETF that holds a number of music and art-related enterprises: the ARK Web x.0 ETF (NYSEArca: ARKW).

ARKW aims to capture long-term growth with a low correlation of relative returns to traditional growth strategies and a negative correlation to value strategies. It serves as a tool for diversification due to its minimal overlap with traditional indices. The actively managed strategy combines top-down and bottom-up research in its portfolio management to identify innovative companies and convergence across markets.

“Music streaming has exploded over the last few years, and because of that, record labels have moved from a declining business in terms of revenue to a growth business over the last five years,” notes Morningstar analyst Neil Macker.

ARKW components “are focused on and expected to benefit from shifting the bases of technology infrastructure to the cloud, enabling mobile, new and local services, such as companies that rely on or benefit from the increased use of shared technology, infrastructure and services, internet-based products and services, new payment methods, big data, the internet of things, and social distribution and media,” according to ARK.

“From the recording label side of it, the way they make a profit is, they’re basically taking that money and then splitting it with the artists themselves. From the streaming side, they do only give away a set percentage of their revenue here. Now, having said that, most of these companies are losing money on the streaming side from an operating income basis. And for companies like Apple and Google, that’s fine because it’s a way to sort of keeping you in the ecosystem. For Spotify, that’s something they’re looking at and one of the reasons they’re moving into areas like podcasting,” according to Macker.