You are at:Home»Crypto Channel»The First Blockchain ETF Continues to Lap Its Competitors 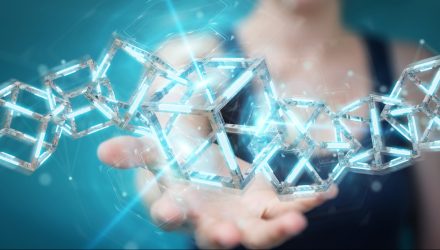 The First Blockchain ETF Continues to Lap Its Competitors

Just as it seems the stack of crypto-asset ETF applications on the SECs desk could not get any taller, another inevitably appears. Bitcoin is booming, crypto regulation has become a hot topic in Washington, and everyone seems to want a piece of the pie.

However, the crypto space is so much more than just currency. The blockchain technology that underpins the majority of the crypto market could, according to proponents, improve the efficiency, security, and connectivity of almost every piece of vital infrastructure in the world.

Blockchain ETFs started coming to market during the original 2017-2018 Bitcoin boom, in response to the SEC’s rejection of pure-play Bitcoin ETFs.

However, in the wake of the COVID-19 pandemic, which exposed issues in the connectivity of many systems, including supply chain management and healthcare, blockchain technology has become valuable in and of itself.

BLOK Soars Above the Competition

The Amplify Transformational Data Sharing ETF (BLOK) was the first Blockchain ETF to market, launching on January 16th, 2018, a week or so before the First Trust Indxx Innovative Transaction & Process ETF (LEGR) and the Capital Link NextGen Protocol ETF (KOIN), and just one day before the Siren Nasdaq NextGen Economy ETF (BLCN).

As the first Blockchain ETF to market, BLOK was able to raise significantly more assets than any of its competitors, with nearly three times the amount of total assets under management than any other Blockchain ETF at time of writing.

BLOK invests primarily in companies directly involved in the development and utilization of blockchain technology. Despite investing in many of the same companies as its competitors, BLOK remains ahead of the pack.

An actively managed fund, BLOK has spread its assets across 46 holdings, which include large cap, mid cap, and small cap companies, with large cap companies holding just under half the fund’s total assets.

The ETF invests in several crypto mining companies and exchanges, as well as companies such as Square and Paypal, which deal with both traditional currencies as well as cryptocurrencies.