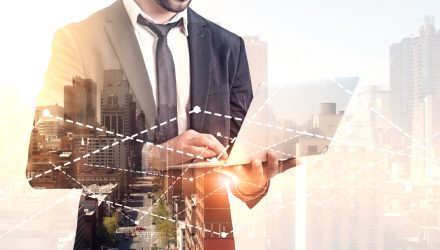 While volatility descends upon the cryptocurrency markets, it’s not affecting the business deals going on behind the scenes. One fintech company is partaking in an acquisition with a valuation of $1.5 billion.

“The acquisition is valued at around $1.5 billion, according to the people,” the report added. “That would make it the largest merger in the crypto sector that didn’t involve a blank-check company, or so-called SPAC, according to data from research firm Dealogic. In May 2021, Galaxy Digital Holdings Ltd. agreed to acquire BitGo Inc. for $1.2 billion.”

In the meantime, Bitcoin continues to be in a price holding pattern of around $43,000 to $45,000 as it reaches close to full mining capacity. The leading cryptocurrency hit over 19 million mined coins recently with just 2 million left to be mined.

“Enemy number one,” Thiel said during the conference, is “the sociopathic grandpa from Omaha.

Bitcoin has been rallying as of late after stumbling to start 2022. While air is coming out the most recent rally, it’s finding price support around $43,000 to $45,000, as mentioned earlier.

Thiel, obviously an outspoken proponent of Bitcoin, cited political reasons as to why the “enemies” are against cryptocurrencies.

“When they choose not to allocate to bitcoin, that’s a deeply political choice,” said Thiel.