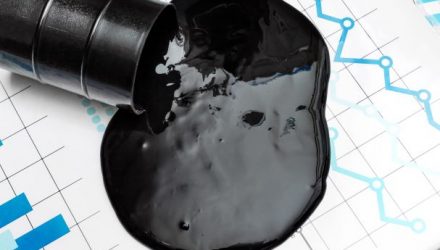 Crude Oil Plummets Under $10 A Barrel As New Contract Approaches

In its biggest one day drop in history, crude oil has fallen off a cliff, down more than 50% on Monday.

Building on the downward momentum from Friday’s decline, West Texas Intermediate crude oil extended the selloff, with a fresh decline under an incredible $10 a barrel.

The May futures contract for U.S. crude oil reached levels unseen since the late 1990s on Monday as it plunged over 50% a day ahead of expiration, as the total loss of demand due to the COVID-19 pandemic adds fuel to a deluge of crude that is set to fill up available storage quickly.

West Texas Intermediate crude for May delivery is trading down roughly 51% Monday in New York, off over $9, at under $9 a barrel, which is currently targeting the lowest close for a front-month contract since December 1998, according to Dow Jones Market Data. A decline of this magnitude, if it holds, would represent the sharpest single-session decline on record. The May contract expires on Tuesday, giving way to an enormous contango, where the next month in crude is currently trading around $23 a barrel, a nearly $15 leap in price.

The sinking front-month contract demonstrates how traders are scrambling to get out of long positions that would require them to take physical delivery of crude amid dwindling storage space, and illustrates a convergence with the physical spot price for oil.

“While we are probably setting the stage for a significant bottom in oil, it does not matter for the May futures contract that will be delivered into a nightmarish bearish situation,” said Phil Flynn, market analyst at Price Futures Group, in a note. “Not only has demand ground to a standstill, but the impact of oil cuts from OPEC+ also will not start in time for the current delivery.”

WTl prices had already fallen 13% on Friday, dropping to their weakest level since November 2001 before this unprecedented decline.

The accelerating pace of the drop in the oil market reveals that the record-setting OPEC+ production cuts were not as effective as a thought in rectifying the decline in demand caused by the COVID-19 pandemic, and President Trump’s rejoicing that he convinced Russia and Saudi Arabia to slash production last weekend was a bit premature.

For ETF investors, this oil slump has also been a blessing and a curse. Those who have held funds like the United States Oil Fund LP (USO) or the ProShares Ultra Bloomberg Crude Oil (UCO) all the way down have lost fortunes. USO is off more than 9% today, while UCO has lost over 11.5%.

However, those who traded these funds on bounces, or used inverse funds like the ProShares UltraShort Bloomberg Crude Oil (SCO) and the VelocityShares 3x Inverse Crude ETN (DWTI) have seen potentially massive windfalls.