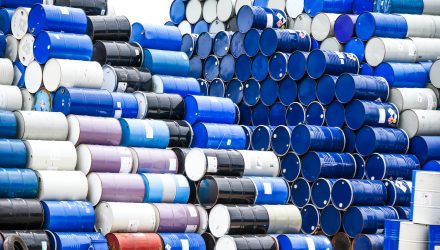 Crude oil has been slipping on Wednesday over concerns of fresh outbreaks of the coronavirus, as well as post data revealing a growth in U.S. inventories.

For the week ending June 12 stockpiles grew by 1.2 million barrels from the prior week, according to data from the U.S. Energy Information Administration. This was, however, less than the 1.6 million build analysts polled by FactSet had been expecting.

West Texas Intermediate dropped $1.17, or 3%, to trade at $37.21 per barrel, before recovering some of those losses.
Crude oil ETFs are slipping amid the futures stumble as well. The United States Oil Fund, LP (USO) fell early on and is off nearly 1% Wednesday, while the ProShares Ultra Bloomberg Crude Oil (UCO) is down 1.58%.

US crude inventories rose by 1.2 million barrels, but distillate stockpiles, which include diesel and heating oil, declined by 1.4 million barrels following weeks of massive builds as refiners continued to blend jet fuel into their distillate pool, EIA data showed on Wednesday.

“That snapped a 10-week streak of builds, and the market needed that,” said Bob Yawger, director of energy futures at Mizuho in New York.

Oil prices have been ramping up since April when they hit negative territory before bouncing, and are influenced by negative forces at the moment, said UBS analyst Giovanni Staunovo, with bolstering from stimulus measures that are also aiding equity markets, but pressure from worries over a second wave of coronavirus infections could damage demand again, as states across the U.S. and countries throughout the globe are showing a growing number of infections.

To curb the spread of a new virus outbreak in Beijing, over 1,200 inbound and outbound flights from Beijing’s two airports were cancelled on Wednesday, accounting for almost 70% of scheduled trips, according to aviation tracking website Variflight. The national railway operator is allowing passengers to and from Beijing to refund their tickets without fees. All outbound taxi and car-hailing services and most long-distance bus routes from Beijing were canceled.

Aside from this panic however, markets found some relief after clinical trial results showed the corticosteroid medication dexamethasone slashed death rates by roughly a third among the most severely ill COVID-19 patients.

“We think the oil market is not currently pricing in a significant probability of either second waves of coronavirus cases in key consumers and the associated lockdowns, or anything less than a rapid return to economic business-as-usual,” Standard Chartered analysts said, pointing to a downside risk for prices in the medium term.

Despite its improvement since April, generally anemic economic activity is still plaguing demand for crude. Oil imports in Japan, the world’s fourth-biggest crude buyer, fell in May to the lowest in almost three decades.