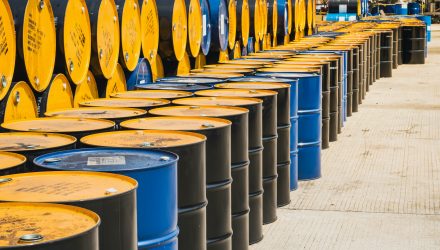 Crude oil is continuing its recent surge on Wednesday after the Energy Information Administration reported a crude oil inventory draw of 800,000 barrels for the week to November 20.

West Texas Intermediate crude oil crested $46 a barrel Wednesday, its highest level since March, when the already precipitous decline from the start of the year began to accelerate. WTI hit $46.26 intraday before pulling back some/

Just the day before, the American Petroleum Institute released news of an inventory build of 3.8 million barrels for the period. Analysts had predicted the EIA to report a moderate build in inventories to the tune of 127,000-barrels. Yet the week prior, the EIA estimated a crude oil stock draw of 800,000 barrels as well.

“It has been a really good run. We haven’t seen a run like this since the spring after we went to negative prices,” said Peter McNally, global head for industrials, materials and energy at Third Bridge. “Sentiment certainly has changed pretty quickly. At any point, it all could take a breather, but lately it feels like supply and demand fundamentals are heading in the right direction.”

Oil prices this week hit the highest since March, largely bolstered by optimism over potential coronavirus vaccines from companies like Pfizer, Moderna, and AstraZeneca. Traders have eschewed warnings about the premature nature vaccine trials success, as well as safety results reported by pharma companies, electing instead to wager on a swift rebound in oil demand given a mass vaccination scenario. Yet the timeline for these vaccinations is still very much uncertain.

Crude trader and investors are also counting on a pending decision by OPEC+ to extend the current production cuts of 7.7 million bpd into next year, even though internal divisions within OPEC have generated concerns, and some members of the cartel are still on the fence.

“There could still be additional petroleum product weakness and higher inventories, before a material rebound manifests,” Bart Melek, head of global commodity strategy at TD Securities, said in a note. “This combined with uncertainty on the OPEC+ production side, given these relative high price levels, suggests that crude has gone as high as it can for now.”