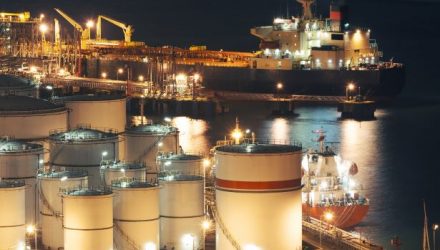 Crude Oil Attempts To Rebound For Second Day In A Row, Gaining 30%

After a harrowing start to the week, crude oil has climbed over 30% on Thursday, building on the gains made on Wednesday, as analysts continue to monitor the effectiveness of ongoing production cuts and increasing U.S.-Iranian tensions.

West Texas Intermediate crude oil gained 30%, or $4.18, to trade at $17.96 per barrel, while international benchmark Brent crude, rallied 11.8% higher at $22.79 per barrel. Oil markets continued on the backs of gains made on Wednesday, where WTI climbed 19.1% to post one of its best days on record, after a horrendous start to the week. In just two days, from Tuesday’s settle price of $11.57 to Thursday’s session high of $18.24, WTI has gained an incredible 57%, prompting investors to consider if a bottom is in.

In addition to rallying back from unprecedented negative prices in the prior futures contract month, President Trump’s threat that the U.S. would “destroy” any Iranian gunboats that bother American ships in the Persian Gulf, has helped markets recover, said Bjornar Tonhaugen, head of oil markets at Rystad Energy.

With oil prices at historic lows, producers have persisted in slashing production and scaling back on shut-in wells. Oklahoma regulators said they would aid producers close wells without taking away leases, which Tonhaugen noted was “a relief for producers that want to cut some output but were hesitating due to regulatory consequences.”

The price of oil had been dropping precipitously since January 8, when nearby NYMEX futures reached $65.65 per barrel as a result of hostilities between the US and Iran in Iraq.

It is unlikely that nearly any investor saw the carnage of the crude markets taking oil into negative territory though. Yet, as demand declined, the 9.7 million barrel per day cut by OPEC, Russia, and other world producers was nowhere sufficient to balance the fundamental equation for the energy commodity, and as the May futures contract headed toward expiration, and traders scrambled to exit, the price of the nearby contract plummeted to a low of negative $40.32 per barrel on April 20, almost $106 per below the early January high.

Despite the rally in crude over the last couple of days, now some experts are warning the WTI June contract month, which approaches expiration on May 19, could dive-bomb in the same way that the May contract did.

“June could see storage tanks struggling to come off highs, in which case the days leading to expiry next month could see yet another squeeze,” Francesco Martoccia, senior associate in commodity research at Citi, wrote in a note to clients.

For investors who are looking to stay invested in crude oil, which has rebounded considerably on Wednesday, up more than 21%, a favorite of many longer-term oriented advisors is the Invesco DB Oil Fund, DBO.