You are at:Home»Featured»Crude ETFs Slip after Oil Hits Fresh Highs 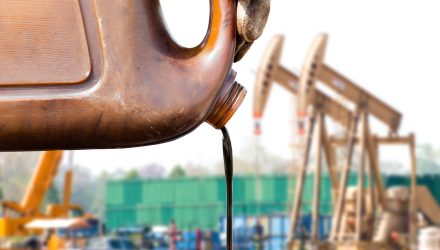 Amid surging gas prices, a return to summer travel, and OPEC drama, crude oil reached new highs on Tuesday, before reversing to retest a recent breakout above January 2020 highs.

Meetings that began last week between OPEC and its allies, collectively known as OPEC+, came to a halt on Monday. “The date of the next meeting will be decided in due course,” said OPEC Secretary General Mohammad Barkindo.

According to the Associated Press, the United Arab Emirates opposed efforts by OPEC+ to extend the global pact to curtail oil production beyond April 2022, referring to any such deal as “unfair to the UAE.”

Unfortunately, this could result in continued spikes in prices at the pump this summer for American drivers, just as many are eager to hit the road, amid easing pandemic restrictions.

This surge in gas prices is even more pronounced in California, where the price for premium gas is roughly $4.617, according to AAA.

“Shopping around can save you 25 to 50 cents, up to a dollar a gallon by crossing from California to Arizona,” Patrick De Haan, head of petroleum analysis at GasBuddy says. “Shop around no matter where you are, but especially if you are crossing state lines.”

Between the current skirmishes within members of OPEC+ and a surge in driver demand, consumer will be paying an additional 10 to 20 cents per gallon by the end of August, according to AAA.

“Production is where it is — and demand is growing,” said Jeanette McGee, an AAA spokeswoman. The price of crude oil is the single largest component in a gallon of gas, accounting for more than half of the price, she noted.

“The national average will probably range in price from $2.75 to $3.75 a gallon this summer,” says De Haan. “Most motorists should see prices fluctuate 25 cents a gallon higher or lower than where they stand today. But I certainly don’t see record prices happening nationwide.”

McGee acknowledged that even a 20-cent increase wouldn’t beat recent average price records, however. In 2014, the average hit $3.70, she noted.

Californians are currently paying the most for gas, shelling out $4.30 on average per gallon.

As of Tuesday afternoon, crude oil has fallen over 2.21% to $73.50, as crude-related ETFs like the United States Oil Fund (USO) and the ProShares Ultra Bloomberg Crude Oil (UCO) are dropping as well. Meanwhile, short ETFs like the ProShares UltraShort Bloomberg Crude Oil (SCO) are seeing short-term gains on the first trading day since the July Fourth holiday weekend, when an estimated 43.6 million people were traveling, according to AAA.

“There’s not a whole lot of breathing room when it comes to supply and demand this summer,” said Patrick De Haan, head of petroleum analysis for GasBuddy.

Consumer prices have also increased 3.9%, the biggest increase since 2008, according to federal government data running through May.

This surge in prices followed problems in May, when a ransomware attack on a crucial gasoline pipeline led to long lines at the pump.

Colonial Pipeline Company operations have since resumed, and McGee said the price effects are now in the “rearview mirror.” Like De Haan, McGee noted that hurricane season might could add pressure to prices as well.

In fact, there’s almost a 60% possibility of a more active hurricane season, according to forecasters at the National Oceanic and Atmospheric Administration’s (NOAA) Climate Prediction Center.

The only supply issue energy pundits anticipate this summer is a potential dearth of gasoline truck drivers. This lack of available drivers help could mean consumers may witness minimal gas shortages in some areas, particularly near popular tourist destinations.

“Overall the refining, marketing and distribution should be able to keep up with demand increases as the recovery continues,” Denton Cinquegrana, chief oil analyst at the Oil Price Information Service, wrote in an email. “There is plenty of spare refining capacity to produce more gasoline if necessary, it’s the last mile haul that is a concern and could lead to some stations running dry this summer.”