You are at:Home»Featured»Crude ETFs Fall Again Due to Rising Coronavirus Cases 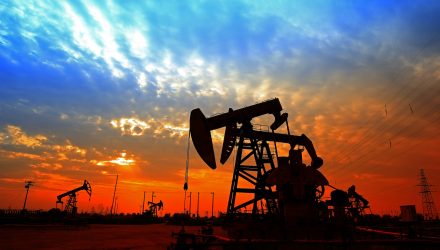 A surge in coronavirus cases is putting pressure on crude oil and crude ETFs Monday. Oil prices dropped again, adding to sharp losses from last week, as investors are concerned about a global economic slowdown.

U.S. benchmark West Texas Intermediate crude futures fell as much as 4% to trade at $65.15 per barrel, before paring some of those losses. Meanwhile, International bellwether Brent crude lost 3.5% to trade at $68.21 per barrel.

UCO is for more aggressive investors, as it offers 2x daily leverage to an index that consists of crude oil futures contracts, making UCO a powerful tool for expressing a bullish outlook on energy prices. Since the ETF is leveraged, it is important that investors actively monitor the fund for changes, and exit as required. Moreover, investors should note that the underlying index consists of oil futures contracts, and as such, the funds does not always move in unison with spot oil prices. For sophisticated investors with a fair amount of tolerance for risk and volatility, this ETF can be a very powerful tool. But UCO should never found in a long-term, buy-and-hold portfolio.

With over 200 million cases worldwide, the coronavirus is exploding in U.S. states like Florida and California, spreading fear throughout stock and commodity markets, as the delta variant has appeared in a number of “breakthrough” cases, where previously vaccinated individuals are still able to contract the virus. These cases have resulted in several deaths as well.

“The biggest challenge for oil markets remains the uncertainty around COVID as the ‘delta variant’ has made for the highest daily case counts since early 2021,” Bank of America said.

Last week, both crude contracts tumbled over 7% to record their worst week since October. The drop arrived as demand worries and a surprise climb in U.S. crude inventory spooked investors. The U.S. Energy Information Administration said Wednesday that crude stocks increased by 3.6 million barrels in the prior week, while analysts surveyed by FactSet were anticipating a 2.9 million barrel draw. Gasoline stocks, however, fell by a larger-than-expected 5.3 million barrels.

China concerns also put pressure on crude on Monday. The country’s export growth unexpectedly fell in July, while imports increased 28.1% from a year earlier. Forecasts were projecting a 33% increase.

As the second-largest consumer of crude oil, China imported 9.7 million barrels per day in July, the fourth straight month below 10 million bpd, according to analysts Commerzbank.

According to recent reports, China is canceling flights, and 46 cities have asked their citizens to avoid traveling. Local authorities have put restrictions on public transport and taxis to cut down on the demand for fuel and crude oil.

“While the number of cases (in China) is low, it comes just as the summer travel season peaks,” commodity analysts from ANZ said in a note, as quoted by Reuters. “This has overshadowed signs of strong demand elsewhere.”

“The price slide is continuing [Monday] amid growing concerns about demand again,” the firm wrote in a note to clients. “Market participants are watching the rising coronavirus figures in Asia with considerable alarm, as this could prompt the Chinese government to take drastic measures in line with its strict zero Covid strategy.”

Other analysts agree that the coronavirus is driving down the price of crude.

“Oil prices are under considerable pressure … with COVID concerns once again being front and centre,” said Craig Erlam, senior analyst at OANDA. “Rising Chinese Delta cases and restrictions has cast doubt over the economy in the short-term. Wall Street banks Goldman Sachs, JPMorgan, and Morgan Stanley all cut their China growth forecasts on Monday, after export growth slowed unexpectedly and on concerns that the resurgent coronavirus could crimp economic activity.

In addition to a potential drop in demand, OPEC and its allies also instituted a production boost this month. In April 2020, the group record began slashing production by 10 million bpd as the pandemic limited demand for petroleum products.

Crude has slowly recovered since last year, and WTI is still up 40% for 2020 despite the recent drop from the $76-77 level. In July, the contract traded as high as $76.98, a price not seen since 2014. Now analysts are predicting a period of consolidation.

“The oil market is likely to remain rangebound here as the physical market is poised to remain in a deficit through the end of the year,” said Tom Essaye, editor of the Sevens Report.

While crude ETF suffered along with losses in futures on Monday, short ETFs like the ProShares UltraShort Bloomberg Crude Oil (SCO) were winners, with SCO gaining over 4.5%.

Like UCO, SCO is a highly leveraged fund that requires vigilance. This ETF offers 2x daily short leverage to the broad based Dow Jones-UBS Crude Oil Sub-Index, making it a powerful tool for investors with a bearish short-term outlook for crude oil. SCO can be a powerful tool for sophisticated investors, but should be avoided by those with a low risk tolerance or a buy-and-hold strategy.