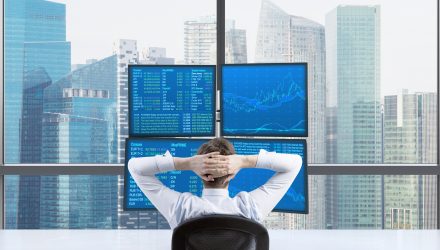 Today is a phenomenal time to be alive. Why? Because how we live, work, and play is changing at an almost unimaginable speed—and it’s nearly all due to advancements in technology. By far the most the most tangible examples of the today’s technology revolution are innovations that have become integrated into our daily lives. Facebook and Twitter have given the concept of “social” a whole new meaning. In our homes, Alexa is everyone’s favorite in-home personal assistant, Nest controls our thermostats and appliances, and smart refrigerators can now automatically reorder groceries when we run low on milk and eggs. We’re living in a new technology ecosystem that helps us manage our lives, online, 24/7. Even so, where technology is having the most impact is not in our personal lives, but in industry. From how we buy and receive goods, to how we drive, to how we manage and receive healthcare, technology is innovating industry around the globe.

For investors, this shift presents an unprecedented opportunity. The time is now to explore the industries and companies that are poised to profit from today’s technology revolution—and to create a 21st century portfolio designed to reap the benefits.

While certainly not as exciting to talk about as drones and self-driving cars, semiconductors and data storage are the true underpinnings of every technology innovation we’re seeing today. The ability to process and store data and build out augmented products and goods and services all goes back to the massive improvements in semiconductor chips over the past 10 to 15 years. These chips are the key to storing and processing the massive amounts of Big Data that fuel our new, technology-driven world.

Consider the recent disruption of the retail industry. Amazon has changed the game in the retail space, and that success is largely due to Amazon’s ability to seamlessly stock and deliver goods. It’s a feat that is only possible with the help of Big Data. Big Data is used to track order frequency and predict trends—which is why you’ll get an email from Amazon reminding you that you’re low on diapers at the precise moment you are low on diapers! Big Data is used to “teach” the huge fleet of robots in Amazon’s warehouses how to pick and pack goods to get orders delivered to customers’ doorsteps in record time. Eventually, Big Data will be the fuel behind Amazon’s drones (which, according to recent news, will even respond to customers waving at them from the ground). And while Amazon may be the most obvious example, this level of innovation and depth of disruption is taking place in every industry today, in every geography around the globe.

From an investment perspective, this means that creating the 21st century portfolio requires looking beyond traditional market sectors of financials, healthcare, oil and gas, basic materials, and even traditional technologies. The key to investor success in the coming decades lies in one place: emerging technology and the companies that are disrupting the world as we know it.

An index designed to track the gains of disruptive technology. There’s another way to describe the emerging technologies that have forever changed the way we live, drive, buy goods, talk to friends, do business and much, much more—and that’s “disruption.” The greatest and most notable advances made in recent times have been powered in large part by disruptive technologies and the companies behind them ready to upset the status quo and forge new normals, whether that old way of doing things was trying to hail a speeding cab with a whistle or writing mental IOUs to friends after a night out. Today, all you have to do to get an on-demand ride or pay a friend is take out your smartphone and open an app. A decade ago sleek flip phones were seemingly all the rage, and now the world is held in your pocket.

This is the overall story of disruptive technology, as concepts like robotics, artificial intelligence, data and mobile have revolutionized every corner of life—and along the way, driven incredible economic gains. These disruptive technologies and the organizations that develop, deliver or otherwise use them represent the most potent market both now and in the future. When constructing a portfolio to fit the 21st century, investors can reference the newly established Nasdaq Yewno Disruptive Technology Benchmark (NYDTB) Index as a measure of the securities and themes most emblematic of the technology revolution and growth.

Because disruptors hail from all different industries, Nasdaq and Yewno recently partnered to launch an index investors can use to track the performance of companies engaged in disruption across a number of themes. Developed through a benchmark approach, the NYDTB tracks businesses in Artificial Intelligence, Robotics, Automotive Innovation, Healthcare Innovation, New Energy & Environment, Internet of Things, and Data Computing & Processing—which further break down into 35 distinct subthemes including: cyber security, blockchain, digital currencies, autonomous and electric vehicles, bioinformatics, Internet of Things, mobile payments, wearable technology, lithium batteries, 3D printing, drones, spacecraft and satellites and more. These subthemes are the very underpinnings of disruption, of the ongoing revolution that’s being carried out and which investors should be most interested in.

Reflecting the positive potential for disruptive technology, the NYDTB is in part created by using an AI-augmented approach to scour over 2 million approved patents from over 120 countries in fractions of the time it would normally take humans. The system evaluates and graphs that patent data against factors like linguistic similarity to the 35 emerging technology subthemes, which is the basis for classification. Patents indicate intellectual property and investment in research and development, meaning the Index selects companies that are likely to be true drivers of future innovation and growth in their space.

The 1,240-component Index is constructed by Yewno compiling a universe of securities and then scoring companies based on their number of patents linked with an identified theme as a share of all the company patents (pure score), as well as their number of patents in a subtheme relative to all patents from all companies (contribution score). Nasdaq then scrubs the list according to eligibility criteria, and the result is a diverse yet focused index that represents broad swaths of technology from all sectors and levels of market capitalization. Not only are the biggest players represented, but so too are the publically listed startups pushing the boundaries of innovation, the ones who further light a fire underneath those titans and which push forward progress for all, the next unicorns.

There is no way to build a 21st century portfolio without technology exposure. Certainly, this sentiment holds true even now, but these disruptive technologies are the crux of investment strategy and will only further be entrenched as such. And now, with the NYDTB as a reference, investors can navigate the water of disruption.

The ‘hype’ of emerging technologies

In late 2017, Gartner published a chart titled ‘The Hype Cycle of Emerging Technologies.’ It included all of the usual suspects, including smart robots, quantum computing, autonomous vehicles, and virtual reality. The list was long, and the predictions followed an old-school technology lifecycle, moving through phases such as Innovation Trigger, Peak of Inflated Expectations, Trough of Disillusionment, Slope of Expectations, and Plateau of Productivity. It’s an interesting perspective. Not because of the technologies themselves, but because of the use of the word ‘hype.’ It begs the questions: what does ‘hype’ really mean? In this case, all of the technologies listed in the chart are real. These aren’t fly-by-night startups, but profitable companies who are delivering real products and services and who are generating very real earnings. It’s no wonder BusinessWire has projected that the global smart robot industry will reach $14.3B by 2023, more than tripling from its $4.9B valuation in 2018 by growing at a CAGR of 28.78% over this five-year time period.

This massive revolution is being driven by a variety of technological breakthroughs that are enabling dramatic growth in all areas of AI and robotics. Cloud computing and the availability of public data are growing rapidly. Intense growth in Big Data is fueling AI, giving robots the power to analyze information of every kind to make strategic, intelligent decisions. The International Data Corporation predicts that the amount of data in the world will grow ten times by 2025 to 163 zettabytes from the 16.1ZB of data generated in 20168. At the same time, robots are becoming much more sophisticated. Intelligent surgical devices are transforming healthcare as we know it. Drones are being applied for everything from military operations to entertainment. And machine learning allows smart robots to share vast amounts of information very quickly, giving them the ability to share learned information and adapt their skills instantly. The impact of AI and robotics is truly a revolution, which makes it one of the most important investment opportunities of our time.

The top 30 or more securities within each of the three categories—Enablers, Engagers, and Enhancers—are selected for a total of 90 or more securities in the Index at the time of the semi-annual evaluations utilizing CTA’s AI/Robotics Intensity Rating. This rating is designed to capture the perceived degree of a company’s AI/Robotics sector involvement within each respective category, and employs a modified equal weighting methodology to achieve an optimal mix of Enablers (25%), Engagers (60%), and Enhancers (15%). This strategy is designed to take advantage of Engagers—companies that receive a large portion of their revenues directly from the development, integration, and delivery of AI and robotics products.

The growth of the companies in the Nasdaq CTA Artificial Intelligence & Robotics Index from a total return standpoint (NQROBOT) is remarkable. Though the live Index officially launched on December 18, 2017, NQROBOT has outperformed the S&P 500 TR Index by more than 1000% since its first day of back-tested history in September 2001 through the end of February 2018.

This impressive performance is driven by the Index’s robust exposure to the global AI and robotics market and spanning the industries that are driving the greatest growth, including technology, industrials, healthcare, and consumer products. Again, this is not technology ‘hype.’ The companies in the Nasdaq CTA Artificial Intelligence & Robotics Index are delivering real products and services and generating very real returns for investors today.