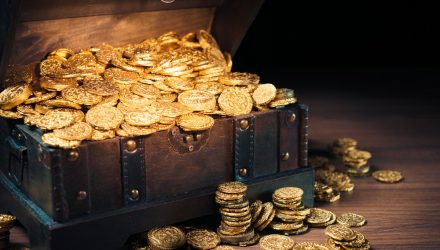 Trade War May Be A Boon For Gold Bugs

Against the current backdrop of the U.S. trade war with China, and the fear and uncertainty that accompany the rampant volatility and the worst May selloff for stocks in 50 years now, gold prices will continue to rise this year, according to one financial executive.

Neil Pereira, principal investment officer of the International Financial Corporation (IFC), shared his thoughts on the precious metals landscape with Kitco News on the sidelines of the Mines and Money conference in New York.

According to Kitco, “In the last year, we saw gold prices fall,” he noted. “But in the last quarter of this year, we’ve seen a big increase and I think that’s partly driven by expectations of reduced long-term interest rates.”

Gold is currently up about 1% on the day, and Pereira’s comments come a few days after Federal Reserve Bank President, James Bullard, announced that a rate cut was appearing as a more and more attractive option, as it could potentially resolve issues of inflation and gain credibility for US markets.

However, interest rates are not the only factor affecting gold prices, according to Pereira. “We’ve seen investors going back into the ETFs, we’ve seen central banks in China, Russia, Turkey, and India all increasing their purchases,” he explained.

“Over the course of the next year, we’d expect to see gold continue to rise,” Pereira added. Bounded by supply and demand constraints, he noted that although the market has been in balance for some time, the future includes long-term supply increases.

“At Friday’s close of $120.65, GLD was down 0.5% on a month-to-date basis. It’s still early innings, but another negative return in May would mark GLD’s fourth monthly loss in a row — its longest losing streak since the six-month slump that kicked off last April,” according to Schaeffer’s Investment Research.

“From a seasonality perspective, the odds are stacked against GLD. Over the past decade, GLD has closed the month of May on positive ground only 30% of the time, and its average return for the month is a decline of 1.10%,” reports Schaeffer’s. “Based on April’s close, another ‘average’ May for GLD would place the shares around $119.87 by month’s end — which would mark its first monthly close below $120 since last November, incidentally.”