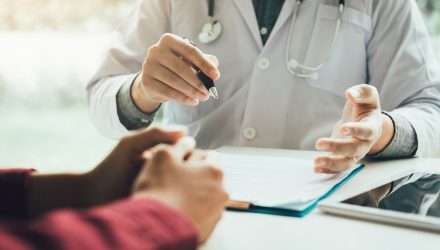 The healthcare sector, led by ETFs like the SPDR Health Care ETF (XLV), is helping to drive stocks higher on Tuesday, along with technology. XLV is up over 1.67%, as reported earnings from several major healthcare companies are driving stock prices up.

The biggest moves in XLV are coming from stocks like United Healthcare, which is up a mammoth 7.25%, Johnson and Johnson, which is up 2.3%, and Merck, which is now positive at 0.25%.

UnitedHealth stock has languished more than 20% since hitting an all-time high of 287.94 last December. After Democrats regained control of the House last November, raising the profile of left-wing Medicare for All legislation, sentiment in the stock shifted. Soft revenue guidance for the second half of the year issued in July also undercut the stock.

UNH’s pop has given a boost to other health insurers which have been struggling recently. Anthem stock jumped 6.5%, Centene stock rose 3.4%, and Humana stock rallied 4.4%. Meanwhile Cigna stock jumped 5.8% and Molina stock popped 4.9%.

Meanwhile, Johnson & Johnson’s stock was up than 2.2% Tuesday morning after the world’s biggest drugmaker also exceeded earnings expectations after announcing adjusted earnings per share of $2.12 for the quarter.

According to FactSet, Wall Street analysts had anticipated earnings per share of $2.01 for the quarter, 5.5% less than what the company reported. Johnson & Johnson reported sales of $20.7 billion, beating the FactSet consensus estimate of $20.1 billion.

For investors seeking other healthcare ETFs to play, the Vanguard Healthcare ETF (VHT) is up 1.87% Tuesday, while the iShares Nasdaq Biotechnology ETF (IBB) has climbed 1.83% today.