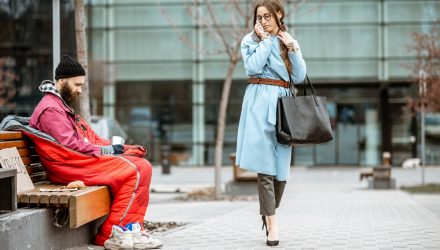 The wide disparity in wealth in the United States that has been forming for decades could represent a significant threat to the U.S. economy, according to former Federal Reserve Chair Janet Yellen.

Yellen, who believes that the economy is in otherwise “excellent” shape, doesn’t see a recession coming, but believes the trade war and other economic risks are beginning to compound, potentially creating a bigger issue.

“I would bet that there would not be a recession in the coming year. But I would have to say that the odds of a recession are higher than normal and at a level that frankly I am not comfortable with,” Yellen said at the World Business Forum.

The former central bank leader from 2014 to 2018 also noted that the U.S.-China tariff war is having a detrimental impact both on businesses and consumers by inflating prices and spawning uncertainty.

Yellen sees the wide inequality in earnings and affluence as continuing to be skewed toward flowed peak earners and individuals with college or university degrees.

“It’s a serious economic problem and social problem because it means the gains of our economic system are not being widely shared,” she added. “It leaves people ultimately with the feeling that the economy is not working for them, a sense of social discontent that is extremely disruptive.”
While Yellen acknowledged that the Fed is in some way contributing to the perpetuation of this troubling trend, she sees President Trump’s pursuance of a trade war and tariff decisions as creating problems for the economy.
“I see no sign that that’s been successful in turning around these trends,” she said of the protectionist trade actions. “These tariffs are taxes on American consumers and businesses. It’s making it more difficult and more expensive to do business, to control costs, and consumers are seeing higher prices from it.”
The Fed’s low interest rates create additional problems, she explained, as she recalls receiving emails during her time from people trying to save for retirement who were penalized by low interest rates.
Investors looking to find a higher yield than the current interest rates offered could consider an ETF like the Schwab US REIT ETF (SCHH), which includes Prologis (PLD), which owns nearly 800 million square feet of warehouse space, plus shopping mall giant Simon Property Group (SPG) and apartment operator Avalon Bay Communities (AVB), all of which get easier access to financing in a low interest-rate environment.
For more ETF news and analysis, visit ETFtrends.com.