You are at:Home»Core Equity Channel»2 Online ETFs That Could Outperform In A Brick & Mortar Retail Slump 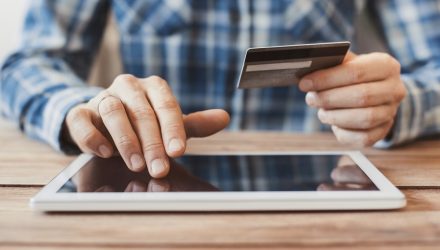 While Target, with its stellar second quarter earnings, is one of the few shining lights in dismal brick and mortar retail sector, where companies like Macy’s, the Gap, Nordstrom and Foot Locker are getting flayed, there is an opportunity that exists based on the ETFs that eschew these kind of conventional retail stores.

The exchange-traded fund that tracks the broad retail landscape, the SPDR S&P retail ETF (XRT), which is essentially flat for the year, while the broader markets, despite their recent struggles, are still up double digits, is indicative of the troubles that the retail stores are having this year.

Leading up to the past two recessions however, online shopping surged, an analysis out Thursday from Ned Davis Research showed. And it appears, as measured by the performance of two online retail ETFs, a similar pattern is now emerging.

“Investors are clearly rewarding retailers that generate the majority of their sales online,” the Ned Davis team noted.

The ProShares’ Decline of the Retail Store ETF (EMTY), has rallied about 12% so far this year, while the Long Online/Short Stores ETF (CLIX), also a ProShares offering, is up about 26%.

According to Proshares, “EMTY is the first ETF specifically designed to benefit from the decline of bricks-and-mortar retailers. Physical retailers are under immense pressure. E-commerce is threatening to take over retail as consumer habits change, shopping moves online, and physical stores struggle to remain viable. With this disruption comes opportunity. The Solactive-ProShares Bricks and Mortar Retail Store Index is the first comprehensive, public securities index composed solely of traditional retailers, and is positioned to potentially become an industry standard for measuring the health of bricks and mortar retailers.”

CLIX was also of great interest in the Ned Davis Research.

“However, online retailers should withstand the next recession much better than traditional retailers given lower overhead expenses,” the analysts said. “This makes CLIX an attractive vehicle to play the long-term shift in retail sales trends.”

Proshares says about CLIX, “E-commerce sales are growing at a rapid pace and undermining in-store retail as consumer habits change and shoppers move online. As popular as they may seem now, online retailers like Amazon and Alibaba only account for about 10% of global retail sales, leaving tremendous room for growth.Physical retailers are under immense pressure. Sales have been declining and profit margins are approaching lows not seen since the recession. Over 30 major retailers have declared bankruptcy in the past three years, and longstanding names like J.C. Penney and Macy’s are struggling to remain viable.CLIX combines a 100% long position in retailers that primarily sell online or through other non-store channels with a 50% short position in those that rely principally on physical stores. Investors have the opportunity to benefit from both outperforming online and underperforming physical retailers. The long/short structure also reduces equity market exposure and potentially results in less volatility than long-only equity strategies.”