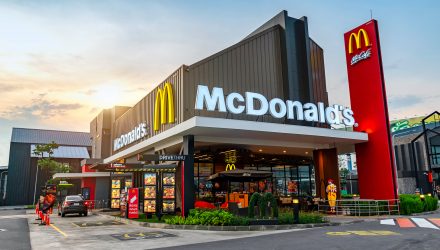 While the coronavirus pandemic has kept millions of Americans at home due to quarantine restrictions, McDonald’s has had a tough time, as evident from another disappointing quarterly earnings report. Some Consumer Services ETFs are slipping amid the news.

Total sales of the foodservice company tumbled 30% in Q2 compared to a year ago, dropping to $3.77 billion, McDonald’s announced Tuesday. Net income shed a massive 68% to $483.8 million. The figures illustrate the April to June period, the first full quarter of when the coronavirus ravaged the United States after the stock market plummeted in February.
“In many markets around the world, most of notably in the US, the public health situation appears to be worsening,” McDonald’s CEO Chris Kempczinski said in its earnings call. “Nonetheless, I believe that Q2 represents the trough in our performance as McDonald’s has learned to adjust our operations to this new environment.”

The fast food giant is seeing some shifts in consumer behavior trends with lockdown restrictions Lessing but believes that the uptick in delivery orders and other buying trends will likely endure even after the pandemic has been alleviated.

After reporting earnings on Tuesday, MacDonald’s shares dropped 2.1% in morning trading, noting that revenue sank 30% during the three month period that concluded on June 30.

While the delivery size became smaller overall, the use of delivery was more pronounced according to the company.

“Part of it was due to mix, so you saw delivery becoming a much more pronounced part of the mix during Q2,” CEO Chris Kempczinski told analysts.

With Covid-19 creating leery consumers who wanted to avoid entering establishments, customers were more apt to use the drive-thru as well, with nearly 90% of sales resulting from its drive-thru lanes in the U.S, something that is helping the company. CFO Kevin Ozan said that markets with a higher percentage of drive-thru lanes were recovering faster, while indoor shopping malls with McDonald’s suffered.

The economy also plays a role in consumer behavior, and McDonald’s is looking to underscore value deals and affordability to get an edge over the competition.

“As you go into potentially a more recessionary type of environment in a number of major markets, having good affordability and making sure that that is a key component of your marketing mix is really important,” Kempczinski said.

With lawmakers looking to revise the extra aid that Americans are currently receiving until the end of the month, Kempczinski said that the expiration of higher unemployment benefits would likely have a damaging impact on McDonald’s business.

“I’m certainly not qualified to make any predictions around whether we’re going to be in recession or not, but I’d certainly say there’s a lot of warning signs out there that would suggest that the consumer sentiment and consumer concerns about the economy is negative and going in the wrong direction,” he said.
The iShares US Consumer Services ETF (IYC) and First Trust Dow 30 Equal Weight ETF (EDOW) which hold a larger allocation of McDonald’s fell in trading on Tuesday as well.
For more market trends, visit  ETF Trends.